Thierry Neuville won a very wet Rajd Polski, his third WRC victory of the year after he outwitted the leading M-Sport driver Ott Tanak on the final day. His car was one of three Hyundais in the top four places overall, and he reduced the world championship lead of third-placed M-Sport driver Sebastien Ogier, who won no stages all event. For two days battling for the lead were Neuville, Tanak and Toyota driver Jari-Matti Latvala who was then sidelined by transmission failure, but despite new upgrades on his car Andreas Mikkelsen who replaced lead driver Kris Meeke on his event was inconsistent and the troubled Citroen team again failed to impress. Once again, the event produced final morning drama and for the second successive year there was heartache for Tanak whose rally ended hitting a tree. Notable performance came from M-Sport's trainee driver Teemu Suninen who finished sixth on his first rally in a World Rally Car. In the support categories Ole Christian Veiby scored his first victory in WRC2, Nil Solans again dominated WRC3/Junior and Valeriy Gorban the WRC Trophy. 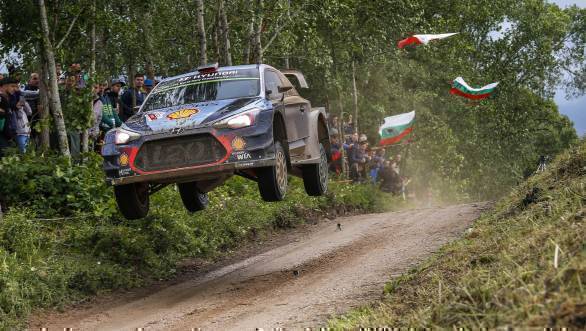 There were drivers who revelled in the absurdly tricky conditions caused by the rains at the start of the rally and those who were fazed by the conditions with which they could not cope. After he was fastest on the dry Thursday evening super special, DMack driver Elfyn Evans did not return to the top ten leader board until Saturday afternoon. Curiously Evans won all three stages which used the Mikolajki superspecial, ending up with as many best times as all the other M-Sport drivers together! Surprise driver from the Sardinia Rally, Esapekka Lappi, held an early fifth place but went off and retired his Toyota after he broke the suspension, while Citroen driver Craig Breen lost time with driveshaft problems compounded by a time penalty for being late out of service all on the first day morning which led to him running first car on the road for the rest of the rally. This will be remembered as Hyundai's Rally. Their cars won 12 of the 22 stages and for most of the event they were level-pegging with M-Sport's cars, the teams challenged only by the Toyota of Latvala. After a very frustrating first half of the season, Paddon's second place was a welcome turn of a page, Dani Sordo's resolute refusal to be fazed by the conditions brought him into a welcome fourth place. The Hyundais showed superior pace (Ogier commenting at the end his car was "missing some performance", adding that his eventual podium result was better than he deserved") and this emphatically highlighted the personal and consistent effort of Ott Tanak, who had only taken the lead after one previous stage win and the setup skills of the M-Sport team. Ogier would later say of his eventual podium place that it was better than he deserved. The four-time WRC title holder failed to claim a single stage win at Rajd Polski

The series of incidents on the Saturday afternoon which started off when the wing fell off the back of Tanak's car, critically delaying him and forcing him into the frantic race for the lead which ended in tears, looked like being an action replay of what happened to Ostberg's customer 2017 Fiesta WRC in Sweden. The official team said they could not account for Ostberg's problem which happened when his car was brand new first time on a rally. For this evet, Tanak was driving a brand-new Fiesta, first time on a rally. This missing wing incident may have proved a most unwelcome moment for M-Sport, but it certainly gave Tanak an opportunity to show the pace of which he was capable. Interesting to see how well the former Toyota trainee driver Teemu Suninen went. The team emphasised his entry was earned on merit, not a prize drive and came with the benefit of full official team operation support. He showed an impressively reliable drive, and on the Friday afternoon with one most unexpected memory - one scratch time. On the event Mads Ostberg overcame delays from disastrous set-up decisions on the Friday morning, the first time the private OneBet Jipocar had been driven in wet conditions. 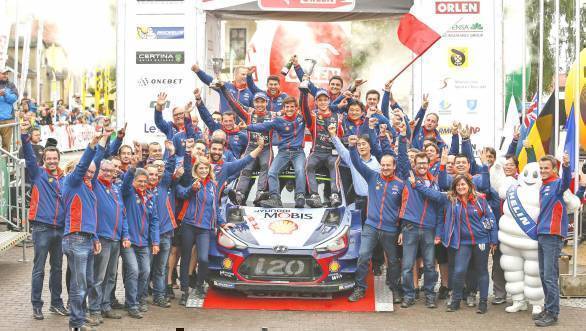 The event quickly became a three horse race, with the unusual sight of the world champion trailing behind. While Jari-Matti Latvala kept up the pressure he was soon on his own. Teammate Esapekka Lappi was out, Juho Hanninen was struggling in the conditions and later with a turbocharge problem, eventually finishing tenth overall, unusually the highest placed Toyota at the finish. Also unusual was that Stephane Lefebvre was the highest placed of the Citroens to finish. After what had been a very lacklustre first half of the rally he progressed impressively and in the second half, notwithstanding driving an original specification C3 WRC. After passing Ostberg, Hanninen and in the final power stage Lefebvre rose to an impressive fifth place. Where was Mikkelsen in the new spec car? He ended up ninth after a rally dominated by little errors but no Citroen drivers scored a best or second best stage time all event. It made one wonder what the absent Kris Meeke, back home on a cycling holiday, made of it all. 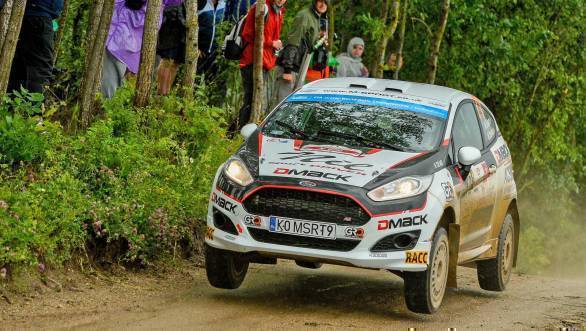 Punctures struck the leading drivers and settled the race in WRC2. Ole Christian Veiby was holding a steady lead over Pontus Tidemand but these delays suddenly increased Veiby's lead. In the joint WRC3 and Junior WRC categories after early first day battles for the lead between Terry Folb, Dennis Radstrom and Emil Lindholm, Nil Solans held a steady lead to win ahead of Radstrom and Folb. In the WRC Trophy, the Mini of Ukraine driver Valeriy Gorban was far in front of the Citroens of Jourdan Serderidis and Jean-Michel Raoux until Raoux went off on the final day.

Championship standings: Hyundai's 1-2 reduced M-Sport's lead in the Manufacturers' series from 40 to 22 and Neuville Ogier's lead in the Drivers' series from 18 to 11 with Latvala up to third, in WRC2 Tidemand's lead stood at exactly 50 points but now over Veiby, in WRC3 Solans' lead over Astier had increased from 11 to 36 and in the Junior category his lead had increased over Ciamin from 20 to 39. Gorban continued to lead the WRC Trophy series now by 32 points from Serderidis who had jumped up to second from fifth.