The second half of the 2016 FIA World Rally Championship starts with Neste Rally Finland (now known as such, without an extra 'Oil' added in the title!), round eight of the series, which this year will encompass 14 not 13 rounds. Traditionally this is the fastest round of the championship (last year's winning speed over the stages was 125.4kph). The event is based as usual in Jyvaskyla, but there are some important changes, with 43 percent of the route being changed from last year. The legendary Ouninpohja and Ruuhimaki stages, for example, are being run in the opposite direction, while for the first time in four years the route will travel to the region of the east of Lake Paijanne, this is part of a project to encourage mutual cooperation with local communities. Shakedown will be the Ruuhimaki stage run in reverse direction to recent years. Notwithstanding the changes to the route, the general characteristics of the event remain the same, with this year's event promising to be just as fast and spectacular. The VW team calculates that on one (long) stage, there are over 70 jumps and cars spend more than 30 seconds in the air. 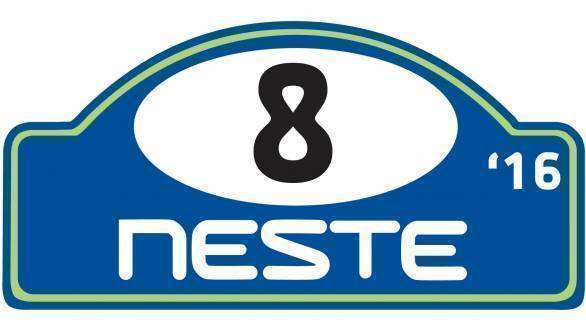 The event starts with a single downtown stage in Jyvaskyla on the Thursday evening and then the usual three days thereafter. There are no fewer than 11 stages on the Friday which in the morning includes one new stage, 7km Halinen, near Petajavesi run on private land and in the afternoon another new stage at Aanekoski, sponsored by the Valtra tractor factory, which is based at that town. Saturday will be spent on stages around Jamsa including a short spectator stage run twice close to the main road south of Jyvaskyla. On the final day stages are all south of Jyvaskyla on the east of Lake Paijanne with the PowerStage at Oittila stage, said to be a microcosm of the specialities of the event rolled into one stage.

One very controversial change this year will be the use of small concrete blocks strategically placed beside stages, intended to prevent competitors taking short cuts. These replace poles used previously, and will be painted pink, with steel posts to locate them in the correct places on the ground if they are dislodged. Same as usual is the nature of the stages, which can become less slippery in mildly wet conditions. The stages traditionally are cleaned by the passage of cars, once again creating a disadvantage for early runners with event favourite Jari-Matti Latvala (winner for the past two years) due to run for the first two full days in fourth position on the road. Soft compound tyres are expected to be used extensively on this event. The generally smooth surfaces prevent much of the usual damage created in gravel rallies, unless, of course, a driver has a high speed off road excursion. By a strange twist of the rules, for this event, the WRC2 drivers have a greater maximum limit on the number of tyres they can use on the event, than World Rally Car drivers if they did not use them too much on the Shakedown.

The entry is a classic with no fewer than 20 World Rally Cars, including four with private drivers, with Kevin Abbring substituting for the recovering Dani Sordo, and with Henning Solberg being given a recent waiver to change from a World Rally Car in which he has been entered to an R5. He takes over the car of Sander Parn. Strong competition is expected in WRC2 with six of the top eight ranking drivers selecting this as an event for them to score points. The event ranks as a qualifying event for both the Junior WRC and the Drive DMack Fiesta Trophy (DDFT). Tactically not selecting this event is the WRC3 series leader Michel Fabre but all the Junior WRC drivers and nine of the DDFT drivers are on the entry list.

Citroen
No fewer than five DS3 WRCs are entered. Kris Meeke and Craig Breen (in the famously successful chassis 17) are the chosen team Abu Dhabi Total WRT drivers this time, with team patron Khalida Al Qassimi also competing. From Argentina come Marcos Ligato and Jose Alberto Nicolas. Pre rally tests were held on the Sunday and Monday before the event. A 2017 test car has just started asphalt tests in South France in hands of Meeke and Lefebvre, with tests initially to programme the central differential settings. Among the DS3 R5 cars, no rallies have yet been tackled with the Evo version but this is planned for Rallye Deutschland.

Hyundai
Late change of plans came when Dani Sordo crashed in pre-rally testing and suffered a back injury, prematurely ending the test which was then later set up again with a new four day test over the weekend before the rally. The team have not disclosed what failed on the car but said the failure did not require modifications to the other cars. Kevin Abbring substitutes for Sordo on a WRC event for the second time in 18 months at short notice! Sordo's accident in Poland was due to a driving error in bad weather conditions. This time the two Shell team drivers are Neuville and Paddon (their own cars from Poland) with Abbring in Sordo's Poland Mobis team car.

M-Sport
Tanak's performance in Poland in the DMack car was a great encoragement for the team. There was a three day test the week before the rally for the team drivers the one day each for Tanak and Bertelli. Usual cars for the team drivers: M-Sport are running Abdulah Al Qassimi's ex-Kuipers and Tanak 2011 car which he was subsequently used in the Middle East. In R5 cars, Parn's entry has been taken over by Henning Solberg (his first rally in an R5). In the Drive DMack FiestaTrophy, Osian Pryce leads the series ahead of Jon Armstrong.

Volkswagen
Main question concerns Latvala's poor form in Poland, the team explaining "Rally Poland has never been his favourite event in terms of stage profiles and driving". For Neste Rally which he has won for the last two years he is to drive his 2015 winning car. Both Latvala and Mikkelsen have the cars they used in Sardinia while Ogier has the car last used by Mikkelsen in Mexico. The team used pre-event testing both for their 2016 cars (one day each for each driver) and also one day for Marcus Gronholm in a 2017 prototype. Notably each of the VW's three drivers has won a world rally championship rally so far this year. Latvala comes to Jyvaskyla exactly like he did 12 months ago: in fourth place in the championship having each time having scored one win, one second, one fifth and one sixth place in the first part of the season!