Andreas Mikkelsen rounded off Volkswagen's four year WRC campaign with the team's ninth and his own second win of the year beating the champion Sebastien Ogier, who suffered again from a running order disadvantage. Andreas however was beaten in the race to second place in the 2016 World Drivers' Championship by Hyundai's Thierry Neuville. Hyundai drivers suffered a collection of troubles, including a time penalty for Dani Sordo after a navigation confusion, a bold but wrong tyre choice for Hayden Paddon and Neuville, and a late puncture for Paddon as well. Skoda driver Esapekka Lappi walked away with WRC2 category, clinching the FIA title, the last remaining major rally honour to be won this year. Hot and abrasive stage conditions due to a new later calendar date for the event forced surprising tyre choices which helped Ogier minimise his handicap but an uncharacteristic spin three stages from the end denied him the hope of a final win for him. The conditions also blunted DMack driver Ott Tanak's challenge, leaving sixth placed Mads Ostberg the top M-Sport driver in the rally and the series. Now all that remains in the WRC this year are announcements about four of the top seven drivers in the Drivers' series not sure for whom they will be driving in 2017. 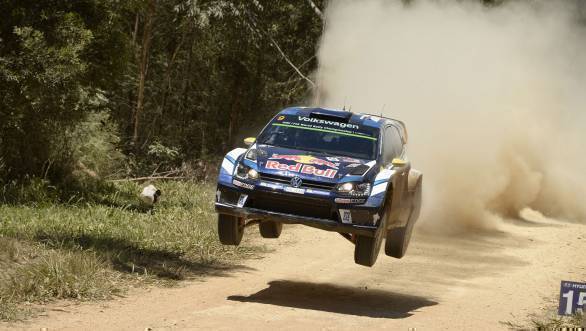 Andreas Mikkelsen yumps his way to victory at Rally Australia

The news that VW was withdrawing from the WRC came only after the end of Wales Rally GB and threw a new prospect on to Rally Australia. Suddenly there was unexpected collateral consequences through the sport, not only for the drivers and personnel concerned at VW, but with so many unknown futures in the sport, on the whole emotional experience of the event. People had a sudden need to re-identify themselves in the sport. Anyway this event was always expected to be a three way battleground between VW, Hyundai and M-Sport, with Citroen having decided that the long-haul rallies were outside their agenda this year. There were no special driver line ups, no special technical developments, just one final time to see the best rally drivers in the world battle it out at the wheel of the best rally cars in the WRC in 2016.

The main objective for Volkswagen has always been the opportunity of scoring second place for Mikkelsen in the Drivers' championship which largely depended on the performance of Neuville, but they had a big shock on the first stage when Latvala damaged his suspension touching a bridge, which dropped him down to seventeenth place and well over seven minutes behind the leader. He did well not to lose heart and fought back, eventually finishing in ninth place. Ogier was driven to extremes, the only top driver to choose soft tyres for the early morning stages on Day 2, when the gravel coverage was at its worst condition for fast driving. Mikkelsen however was going well losing the lead only on the second stage when fourth running Paddon had a run clear of hanging dust and took the lead. Mikkelsen's only crises came seven stages from the end on Saturday afternoon when the underneath of his car was damaged, leading to damage to the foot pedal unit, in which the clutch pedal jammed the brake pedal in the down position. This cost Mikkelsen around ten seconds and by the end of Day 2 his lead of 12 seconds had been reduced to two seconds, leading to an exciting morning on the final day. On the final morning Mikkelsen teammate Sebastien Ogier had an uncharacteristic spin and himself lost a quarter of a minute, giving Mikkelsen the breathing space he needed for victory. There were scenes of emotion round the team when the rally came to an end. 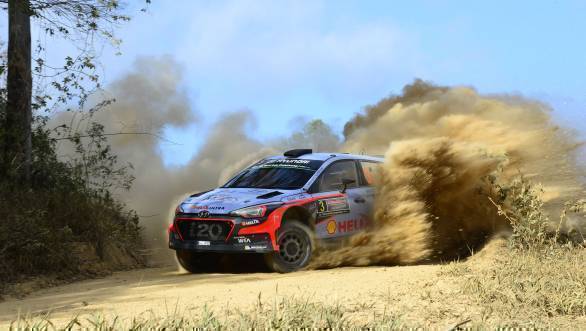 Hyundai achieved everything they could hope for when Neuville achieved a podium position at the end and had sufficient points to maintain his second place in the Drivers' championship. But they had a muddled event largely because of the difficulty of deciding the correct tyre choices. Second running Neuville found the tracks so challenging that he drastically changed his driving style, finding sideways driving gave him better grip while Paddon made a mixture of softs and hard tyres when every other Michelin driver used softs in the morning stages, and found he could barely drive his car in a straight line. Just when he was safely in a podium place within sight of the leaders he punctured on the final morning. Sordo had a miserable first day when he incurred a twenty second penalty on a very short WRC event when the top runners stayed closely bunched together and would eventually cost him a podium place.

It was unusual for Mads Ostberg to enjoy a rally without the countless time consuming problems which have been plaguing him during the season. He finished sixth overall, after lying fifth during a long battle with Dani Sordo, despite two poor times on the long 50km Nambucca stages suffering firstly from dust and then handling difficulties after he had suggested a change in his set-up. His teammate Eric Camilli was driving a steady event and lying seventh close behind Ostberg when he then rolled his car three stages from the end and did not finish. After some excellent performances during the season on his new generation range of DMack tyres, these tyres did not work well for Tanak in the extreme hot and abrasive conditions of Australia. He bravely battled on after he dropped back after a spin on Friday morning, and then was stopped by police on the Saturday after which led to a forty second time control penalty. Once again Ostberg finished a season with the top championship score in his team but it was widely wondered if he was being squeezed out of the M-Sport team.

The race for the WRC2 title was finally won by Esapekka Lappi in the official Skoda team Fabia R5 while his championship rival Teemu Suninen (in the private Oreca team Skoda) who were waiting to see if his earlier efforts had been enough, which eventually they weren't. Suninen tied on points with Fiesta R5 driver Elfyn Evans for second place but Suninen took the position under tie deciding rules. Simone Tempestini had already done enough to take the WRC3 title but nevertheless Michel Fabre went to Australia and his walkover result brought him to within just one point of the title.