Jari-Matti Latvala ran away with Rally Mexico, benefitting from two full days of favourable running order position, heading his Volkswagen teammate Sebastien Ogier to win the event by a minute, given VW a record twelfth successive WRC win. It was an event noted for crashes for both Andreas Mikkelsen and Thierry Neuville, by the efforts of Hyundai driver Dani Sordo to finish third despite technical troubles and for yet another measured run by M-Sport driver Mads Ostberg to finish fourth which now elevates him to second place in the World Drivers' championship standings behind Ogier. The well run event was noted for excellent stage conditions, even on roads used several times, and for the bold 80km stage run on the final morning. 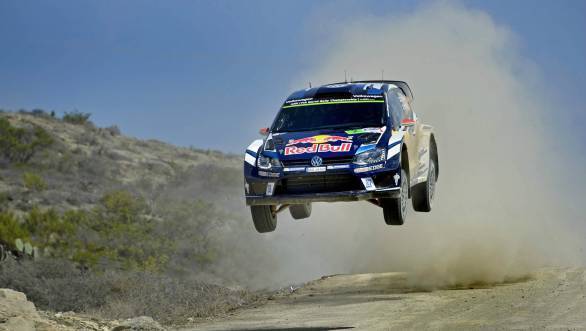 It was Jari-Matti Latvala's turn to take advantage of the agony of his Volkswagen teammate Sebastien Ogier who predictably suffered the ultimate misfortune of his own success  running first car on the road on a dry gravel rally, on the longest rally expected this year. For the first two days, when championship standings dictated the running order, Latvala who currently had zero points to his credit after two rounds, won every gravel special stage on the Friday and Saturday and pulled out a lead of over a minute and a half. His disadvantaged colleague Ogier admitted there was nothing he could do, and by the middle of the second full day he gave up pretending there was! Volkswagens had been lying 1-2-4 until midday Saturday when Andreas Mikkelsen crashed and was out of the event.

This was the first event in the season in which there was no Citroen WRC presence so this was to be a three sided battle between VW, Hyundai and M-Sport. With only two clear weeks since Rally Sweden there was a rush to prepare for the first long-haul event of the year, though as customary no testing work was allowed for the WRC teams in the country. They went instead to France or Span to simulate the dry gravel surfaces and if possible the high Mexican altitudes. There was no technical novelty among the teams but this was the first non-winter gravel rally of the season which meant a new experience for the Hyundai team NG i20 WRC cars. Despite taking the initial lead on the short downtown opening stage, things started to be difficult for the team with more technical gremlins emerging as the event progressed, and on top of these Thierry Neuville went off the road on the first full day of the event, damaging his suspension and was out for the rest of the day. Then he crashed heavily on the following day and Hyundai's wonder boy driver was not in the management's good books. This time the team's saviour was Dani Sordo, who put up with the problems of the car and held third place behind Latvala and Ogier for two full days. The team's saviour in Sweden Hayden Paddon also put up with mechanical problems as well as damaging his suspension twice but bravely struggled through to finish in fifth place.

So it was that the attention swung round to the hapless M-Sport team. Their number one driver Mads Ostberg started with the horrendous handicap of making the wrong tyre choice on the Friday morning, completely misjudging the way the temperatures in the mountains would change which make soft tyres much more suitable than hard tyres. By midday he was well down in fifth place, falling to sixth when Paddon charged past him. Hard tyres were right for the Friday afternoon and Ostberg set about stabilising his position. He rose back to fifth when Paddon lost two minutes off the road and then he was up to fourth, courtesy of Mikkeslen's misfortune. Teammate Eric Camilli had another bad event, damaging his suspension when he impacted a rock that had already been dislodged by earlier runners - and had already been touched, without damage, by Latvala. 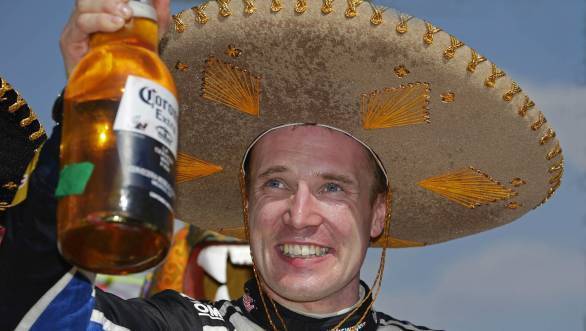 As the 80km stage approached the running order for the final day was now based on reverse event standings after the end of Day 2, when overall the order was Latvala, Ogier, Sordo, Ostberg, Paddon and with Tanak's DMack shod Fiesta WRC ahead of the similar but Pirelli tyred cars of Prokop and Bertelli. Opinions about the wisdom of the 80km stage, the maximum permitted distance allowed under WRC rules between tyre changing points. The complexity of the roads in the hills north east of Leon made a route of good quality roads of this length completely feasible and full advantage was taken by the organisers. Predictions of Armageddon alarming the competitors was well off the mark. The only effect was that the gaps between the leading crews just got bigger.

Latvala was so happy at the end of the event. "It's a fantastic feeling. I had such a difficult start to the season with two rallies with zero points. My mind was not so good, I had a difficult time. Mexico has not been a strong rally for me in the past. I was here ten years ago for the first time and this is really the first time I am really really driving the rally without any problems and winning". What a curious championship we have when Ostberg, a driver who has not scored a stage win or even a second place on a stage all year, is now second overall the championship! Finishing tenth overall, his best result on a WRC event, was Valeriy Gorban in a lone Mini John Cooper Works WRC. A lot to contemplate before the championship contenders meet again, in Argentina, in six weeks' time.

After Ricardo Trivino had to withdraw his WRC2 eligibility, when his Citroen was stuck in docks in Colombia en route to the event, only eight cars started in the WRC2 category. Right from the start there was excitement as a battle developed between Teemu Suninen and Nicolas Fuchs for the lead but on the first stage of Friday afternoon it all went wrong and Suninen found he was leading by a minute and a half. Khalid Al Suwaidi had broken a driveshaft, had this repaired but then withdrew feeling unwell. Armin Kremer had been lying third but stopped on Friday afternoon and later that day Radik Shaymiev stopped with engine trouble. On Saturday Abdulaziz Al Kuwari and Kremer, again, stopped while Fuchs suffered considerable delays with turbo trouble. Al Kuwari's problem meant that Hubert Ptaszek was now lying second some 12 minutes behind Suninen by midday on Saturday, by the end of the day his lead was up to 18 minutes! Suninen held ninth place overall going into the final day which is where he eventually finished, winning the category by over 20 minutes from Ptaszek, Rendina, Fuchs and Kremer. In the WRC2 championship standings the absent Elfyn Evans still leads the series.

There was only one entrant in WRC3, this was the 61 year old Michel Fabre who plodded on gaining maximum championship points and to be leading the series after round 3. Mexico was only Fabre's fifth WRC appearance since he made his WRC debut in the series in 1986!