By winning the one rally which the running order rules made it seemingly impossible to achieve, Sebastien Ogier's third World Drivers' title could hardly have been more convincing. He has now won more world rally titles than anyone except Sebastien Loeb, Juha Kankkunen and Tommi Makinen and his thirty first WRC win puts him now top of the table except for Loeb. And as for Ogier's team Volkswagen, who won their third successive Manufacturers' title, only an error denied them a perfect 1-2-3 finish on the East Coast rally. 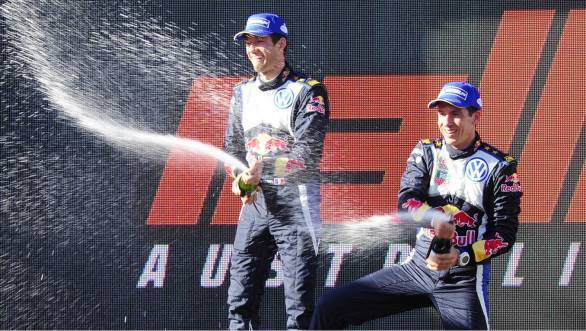 Nasser Al-Attiyah, back for this occasion in a Ford Fiesta RRC, led the WRC2 category from start to finish, beating the similar cars of Yuriy Protasov and Abdulaziz Al Kuwari.

The only driver to challenge the Volkswagens was Citroen driver Kris Meeke, taking advantage of the running order rules was heading for a spectacular win but threw away his chances with a tyre choice error, though he fought hard till the finish, lucky to achieve a podium result because of a time control error by Mikkelsen.

Before the rally it seemed that championship leader Ogier, ordered by the rules to run first car on the road could only succeed on this event if it was wet but it stayed dry and warm. Only by capitalising on even the slightest error of his rivals and maintaining non-stop effort did he defeat the pundits. It was an unbelievably hard job. For more than the first half day he was outside the top six, facing soft loose gravel surfaces when cars behind had progressively cleaner roads, but on the second day, with its two runs through the 50km Nambucca stage, his unrelenting efforts started to pay off. From fourth place after stage 9 he rose three stages later, at the end of the day, to take the lead. 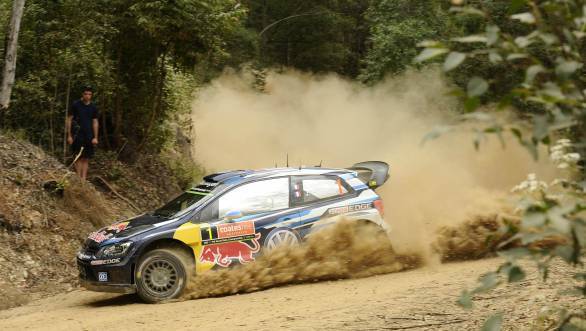 Two drivers stood to gain spectacularly by Ogier's disadvantage, one was Haydon Paddon, the New Zealander who was promoted for this occasion to the full Hyundai team and who was running ninth and the other was Meeke who was running sixth. Paddon's hopes were dashed on the Saturday morning by differential troubles, but he fought back in the end finishing the rally in fifth place, behind three Volkswagens and Meeke.

Meeke was distraught at his Day 2 mistake, "I had the chance of gaining a big lead on stage 9", but in the end he was only fourth quickest, but strangely the misfortunes of the others meant that he actually took the lead  but by just 2.6 seconds, not by a huge margin which would have carried him safely in the lead to the finish. Such was the curious way the rally ran, Meeke held the led after seven of the seventeen stages but only made one fastest time.

Dani Sordo was fastest on the three opening stages but when he was no longer benefitting from driving on freshly cleaned roads he was out of the lead and 24 hours later on his way was down to finish eighth. The final stage on the Saturday was the most controversial as the organisers followed suggestions from the FIA to run a gravel stage at night.

With memories of the extraordinary event the last time a dry nighttime gravel stage was tried (at Catalunya, with disastrous consequences because of hanging dust), and hearing stories of the horrific experiences of old time East Coast rallies, drivers were very dismayed and the condemnation was loud and widespread, even if the stage involved was only eight kilometres long and mostly run in open countryside rather than under the trees. With every passing car the visibility predictably worsened. Thierry Neuville said the concept was "dangerous", Ott Tanak said it was "stupid".

Australia is traditionally a bad luck event for Citroen, and this year their misfortune struck Mads Ostberg before the start when he rounded a corner in recce and was confronted by a logging truck which was on the wrong side of the road. The force of their collision fractured two ribs and he could not start the rally. This gave a surprise chance for the team as Stephane Lefebvre was in Australia only to make the recce, ready for another year, the chance to drive Ostberg's rally car. He finished the rally in 13th place after missing a stage when the suspension failed, gaining one manufacturer point for Citroen Racing, but too little too late to prevent VW from taking the Manufacturers' title.

VW was already out of sight in the championship, meaning that the fight was on for second place. Helped by giving orders to Dani Sordo, already suffering gear selection troubles, that he should let Thierry Neuville finish ahead of him and gain two extra championship points, Hyundai are now strong favourites for that second place, even though Neuville struggled to improve on his recent performance shortfall.

M-Sport also had an unhappy driver, this time it was Elfyn Evans who was quite unable to be confident on the fast, slippery roads of New South Wales. Ott Tanak was much happier, finishing sixth overall despite suffering differential trouble on the Friday afternoon. Bertelli retired with damaged rear suspension on the final stage.

With both Volkswagen and Ogier securing the 2015 Manufacturers' and the Drivers' titles, the battle was on for honour in the other positions. In the Manufacturers' series the difference between Hyundai in second and Citroen in third place remains 13 point. In the Drivers' series Volkswagen drivers continue to hold 1-2-3 and despite his absence Ostberg maintained his fourth position.

Following on Ogier's title came his codriver Julien Ingrassia won the codrivers' title again. The final word came from a very happy Sebastien Ogier: "It has been an amazing season, the best for sure I have ever done. For sure it was the most difficult one to open the roads and still we managed to win it. It is perfect way to get the title again with a victory. On paper this rally was impossible to win and that is why to make it this weekend for sure really significant for me. It is always hard to rate victories between each other but this one was definitely a very very beautiful one".

There were seven WRC2 competitors including two Production Cup crews. Nasser Al Attiyah was back with a Fiesta for this event and led the category from start to finish, chased initially by Yazeed Al Rajhi, who then lost two minutes with a puncture, allowing Yuriy Protasov into second place. On Day 2 Nasser had transmission trouble with only rear-wheel-drive and a misfire and his previously healthy lead shrank to 10.3 seconds, luckily not worse as Protasov was slowed by cows in the first Nambucca stage. Scott Pedder went off the road on Days 1 and 2 and eventually finished the event in last place, Nathan Quinn's Mitsubishi took fourth place in the category and was the best Australian local driver on the event, winning the Production Car Cup ahead of regular competitor Gianluca Linari (Subaru). Tony Sullens went off the road and partly blocked a stage on Day 1 and then retired his Citroen DS3 R3T on Day 2 when stuck in fourth gear. Al Rajhi went off the road shortly before the end of the second Nambucca stage, the only WRC2 retirement.

On the final day Al Attiyah had a spin and stalled on the opening stage but Protasov on the softer Pirelli tyres than Nasser's harder Michelins kept up the pressure, but on the final stage of the morning Nasser had an unexpected piece of luck when Protasov incurred a 10 second penalty for a jump start. Protasov made best time on every stage during the final day but it was unable to catch Al Attiyah who secured his third category win of the season. In the RC4 class the initial leader Stephen Raymond led but retired leaving Rhys Pinter's Fiesta R2 the only finisher. In the category for special locally homologated cars the winner was Eli Evans whose Citroen DS3 R3T had to be substantially rebuilt after a heavy crash at Shakedown, ahead of Molly Taylor's 2-litre Clio, which had brake problems. Adrian Coppin survived an early accident but Tony Sullens similar car retired with gearbox trouble.