Wales welcomed the world rally championship to its Principality in the way it knew best, with rain and wind and pitfalls galore in the forests. It was a surprise that Sebastien Ogier led from start to finish, disappointment that the anticipated battle with his teammate Jari-Matti Latvala ended on just the second stage of the event. Citroen out distanced their rivals Hyundai and finished up second in the Manufacturers' championship with their driver Mads Ostberg the best non VW driver at the end of the season. Of the manufacturer teams only the Citroen and Hyundai official drivers competed the route. With the WRC2 title already decided, the WRC2 category was dominated by the two Toyota trainee drivers, Eric Camilli (Fiesta R5) and Teemu Suninen (Skoda S2000), the Finnish driver finally beating the Frenchman when the Fiesta's turbocharged failed. In WRC3 the Junior Champion Quentin Gilbert won already the title but his hopes of winning the category were thwarted by a broken water pump belt letting 19 year old Ole Christian Veiby lead nearly all the way finishing ahead of 21 year old Fabio Andolfi. He won the WRC3 as well on the final morning. 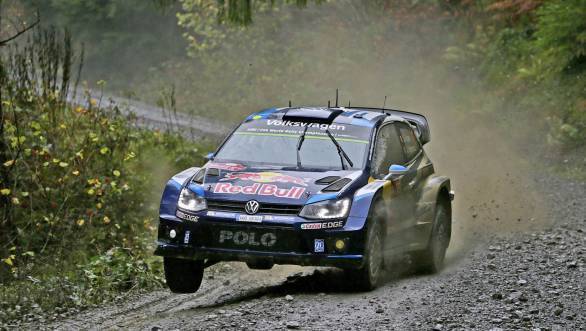 When Volkswagen chief Jost Capito said his drivers would be free to fight each other for victory, and when M-Sport chief Malcolm Wilson said he didn't mind if his drivers went off the road, so long as they showed their pace, it sounded as if the Wales RallyGB was going to be memorable. It all started out well with Sebastien Ogier and Jari-Matti Latvala were separated by less than a second on the first stage but it all went wrong on the Friday morning when Latvala went off the road. Andreas Mikkelsen found it hard to get into the groove as Ogier drove away, despite being distracted by news arriving of the tragic events from France and was distracted on Saturday. Back at M-Sport, Ott Tanak had trouble finding a rhythm while Elfyn Evans punctured and also found it difficult to match the speed of the Citroens, let alone the Volkswagens. So right from the start there was more focus on the various championship titles waiting to be resolved, and most of all the fight for second places in the world championships. In the Makes' series, the Citroen drivers knew that the future for the team and their own careers probably hinged on this event and right away Kris Meeke moved into second place with Mikkelsen third and teammate Mads Ostberg fourth. The Hyundai drivers meanwhile were already in trouble. Thierry Neuville, already demoted for this event to the second team, lost a wheel on Day 1, while Hayden Paddon promoted this time to a main team drive was having difficulty in the slippery conditions. All this left Dani Sordo, holding fourth place, the top Hyundai driver with Paddon in fifth. Sordo's main problem was downshifting which caused him to go off the road and lost time on Day 2 while Paddon had hydraulic troubles. Ostberg meanwhile had his own unpleasant problems with a hole in the floor of his car which let quantities of glutinous muddy water into the footwell, eventually leading to him slipping off the road on Day 2 and dropping to eighth place. With Meeke solidly holding on to second place the Citroen championship chances still looked good, thanks to the problems for Hyundai. Meanwhile another curious situation emerged, the official race for the "best-of-the-rest" driver behind the Volkswagen drivers. Going strongly was Ostberg but when Ostberg was delayed Meeke's needed to secure second position for the sake of the team. Ostberg ended up seventh when M-Sport lost Tanak on the final day and this let Ostberg more comfortably ahead of him in the series, behind Ogier, Latvala and Mikkelsen. 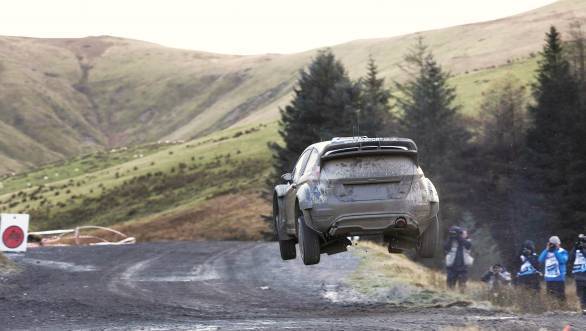 As for M-Sport, things were not very good. Tanak had gradually improved until he was holding fourth place at the end of Day 2 and had scored one fastest stage time at Chirk, but then he went off the road. With Evans eventually finishing sixth behind Paddon, seven of the top teams' eight drivers finished 1-7, and the best driver behind them was Stephane Lefebvre making a promising WRC run, finishing ahead of the Fiesta WRC privateers Robert Kubica and Lorenzo Bertelli. Latvala's disappointing rally ended with a happy note, victory on the Power Stage!
Interest in WRC2 was spread two directions, the race for the lead and the battle for the Production Car Cup title. With Nasser Al Attiyah already the champion, and the withdrawal by Skoda Motorsport of their entries for Pontus Tidemand and Jan Kopecky and a Day 1 puncture for Craig Breen in his family's team Peugeot, attention passed over to newer names. The two trainee Toyota drivers, Eric Camilli in the Oreca team Fiesta R5 and Teemu Suninen in Toni Gardemeister team's old Skoda Fabia S2000 who walked away from the field. Breen gradually recovered from his setback and going into the final stage he was third and finished third. Then Camilli had turbocharger problems and lost enough time to let Suninen into the lead. Yuriy Protasov was running third in a Fiesta RRC but then went off the road on stage 10. Tom Cave withdrew the night before the start because of a family bereavement. The Production Car Cup was fascinating. Max Rendina had entered his quota of points-eligible events but stood to win if neither Gianluca Linari or Joan Carchat could not catch his total. Only Linari and Carchat could score points, 25 for beating the other, and 18 points for the beaten one. Linari settled for a safe 18 points, withdrawing and running under Rally2 rules for the first two days and cruising his way to the finish line and the title on Day 3.

Quentin Gilbert had already secured the associated Junior World Rally Championship but still the WRC3 title was unsecured, and here in Wales there were three contenders able to score points, two of them (Simone Tempestini and Ole Christian Veiby) who were able to catch him if circumstances allowed. Gilbert led from the start but on the first afternoon he had to stop when the water pump belt broke and immediately he had to run under Rally2 rules. Earlier on Day 1 Tempestini had brake trouble and had to stop for the day but he also restarted. Veiby meanwhile had gone into a lead of more than two minutes ahead of Chris Ingram and of the 21 year old Peugeot driver Fabio Andolfi. On the road to the final stage of the event the cars had to pass a swollen river crossing and Ingram's car stopped, as did another WRC3 driver Mohammed Al Mutawaa. Tempestini meanwhile retired on the final day with engine trouble after surviving clutch trouble which meant that Gilbert won his second FIA title of the year.

So Gilbert won the WRC3 title, the gentleman driver Gianluca Linari struggled through with his car to the finish to win the final ever Production Car Cup title. Jonathan Jones won RC5 and Fabio Andolfi RC4. Ostberg ended up the best of the rest of the drivers, his team Citroen the best of the other manufacturers. A lot to remember, but not everything we had expected a week ago.