Same team, a different driver. Andreas Mikkelsen gained his debut WRC victory in Spain when the Volkswagen team leader Sebastien Ogier crashed on the final stage, causing the stage, to be stopped and interruption times applied for the support series and remaining competitors bringing an unexpectedly early conclusion to the WRC2 title race, won by Nasser Al Attiyah. For Al Attiyah his third place in the category in Spain clinched his third major FIA title in three weekends, after winning first the FIA Cross Country series and then the Middle East Rally Championship. Pontus Tidemand was Al Attiyah's strongest remaining challenger for the WRC2 title and did his best by winning the category, aided by tactical support of two other Skoda team drivers, Jan Kopecky (second place) and Esapekka Lappi (who crashed). This was Jari-Matti Latvala's fourth successive second place on this event. Skoda scored 1-2-3-4 in WRC2. 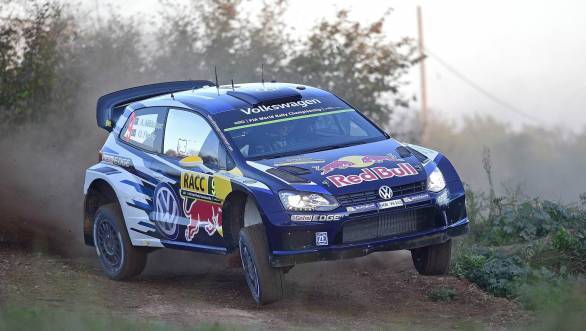 With Ogier crashing out, victory in Spain played nicely into the hands of young Mikkelsen

Until the final stage the Catalunya Rally had all the makings of yet another domination by the world champion Sebastien Ogier, until a most uncharacteristic error suddenly upended the results tables and handed victory to Andreas Mikkelsen. The superiority of the Volkswagen team was again not only in mechanical terms but also strategical superiority but there was a twist. Their cautious tyre tactics approach for the final day had an unexpected ending, which gave their number three driver Mikkelsen a glimpse of a top placing - which a last stage crash by Ogier provided quite unexpectedly! 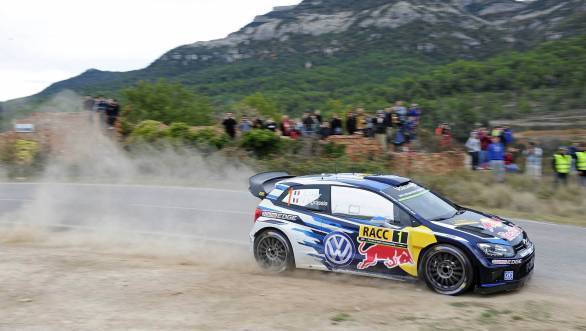 Ogier crashed out of the rally with a lead of 50 seconds over the rest of the pack, not very pleasant for the already crowned World Champion

The now traditional mixed surfaced format of the rally, coupled with the required tactics of tyre managements to gain advantage in the two long gravel stages on the opening day provided earlier opportunities for rival drivers, notably Robert Kubica who led momentarily after two stages, Ott Tanak who won three stages and Mads Ostberg who also won two stages on gravel. On the first afternoon, the morning's traditional road sweeping was replaced by tyre management duties as the surface became very abrasive. The rally took on familiar aspects with Latvala and Ogier vying for the lead. Ogier had a four second lead over Latvala on Friday evening, the biggest margin so far. Latvala's hopes were dashed when he punctured on stage 12 and Ogier suddenly had a lead of over 50 seconds from Dani Sordo's Hyundai. Mikkelsen started to smell the opportunity to push ahead and challenge Latvala for second place. The race for second place was intense with only 12.9 seconds separating the second and third placed drivers on Saturday evening. With the fear that there would be a lot of loose gravel on the tarmac stages on the final day, Ogier and Latvala were ordered to carry two spare tyres whereas Mikkelsen enjoyed the greater performance available with only one, and took full advantage. He reached the end of the final stage happy to be second and gaining the maximum bonus points from being fastest on the PowerStage - only to hear that Ogier had crashed and he had won! 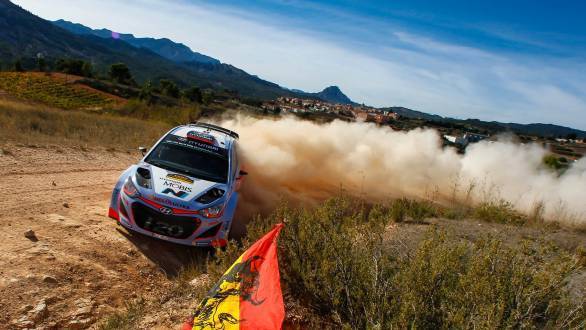 Dani Sordo took Hyundai to the podium, behind the two Volkswagen Polos that did finish

The next big battle of the event was for second place the Manufacturers' series, between Hyundai, Citroen and M-Sport. With Elfyn Evans again in non competitive form, high hopes rested on Ott Tanak, but on Saturday morning both drivers went off the road. Citroen had given strict instructions to both its drivers to finish at all cost. Ostberg immediately started confidently and drove a very impressive event lying second early on, but had a leaking valve and a slow puncture which set him back. Kris Meeke was unhappy, regretting the team not having a test session on Spanich tarmac, but gradually settled down and finished in sixth place, 1.9 seconds behind Ostberg. Over at Hyundai was the local hero, Dani Sordo, and drove solidly to finish the best non-VW drive in third place, but Thierry Neuville could not match the reliable speed of the Citroens and on the penultimate stage was delayed by transmission trouble. Hayden Paddon who was fastest on Shakedown finished just 15 seconds behind the Citroens, despite being slowed by two punctures en route.

At the start of the Catalunya Rally six drivers still had the chance to win the WRC2 Drivers' title and all were present in Spain. Leading the series was Nasser Al Attiyah, who despite being a Skoda driver on this occasion motivated the Skoda factory to enter a three car team determined one way or another to ensure a fully committed Skoda driver would take the title. Regular Skoda drivers Pontus Tidemand and Esapekka Lappi were entered, supported by the Czech champion Jan Kopecky. Al Attiyah played a cautious game, but still had to drive all of stage 8 on the Friday on a flat tyre. Tidemand meanwhile was in a league of his own, pulling away on the gravel from Kopecky and Lappi and originally Al Attiyah. Lappi however went off the road on the second stage on Saturday but this introduced a new challenger, Eric Camilli, who steadily held third place in front of Al Attiyah until the second stage of the final day. Championship permutations stated that Tidemand had the chance of being champion if he won both in Spain and in WRGB unless Al Attiyah won the series in Spain. This was Al Attiyah's seventh and final chance to score points this year and his third place was ultimately achieved on the final morning when Camilli had a broken exhaust manifold, but now he had another challenger. Faithful Skoda driver Armin Kremer had speeded up, cheered up by the factory team who were not too happy that a journeyman Skoda driver should take the title, and as the cars reached the start of the final stage, Kremer was just 0.1 second behind Al Attiyah. Then came the unimaginable stroke of luck for the Qatari. The final stage was stopped and Nasser won his third title in three weekends in a row. Of the other contenders Kopecky survived power steering trouble to finish second, Yuriy Protasov was delayed with a puncture, Abdulaziz Al Kuwari with power steering trouble and Jari Ketomaa concentrating on testing new Drive Mack tyres. Unhappy competitors included Craig Breen whose transmission failed. Skodas took the top four places in the category on the event, Protasov Fiesta RRC was fifth.

The WRC3 championship was struck by the decision by the Catalunya Stewards to remove the WRC3 points gained by Gilbert, Folb, Rossel, Veiby and Perry at the Tour de Corse, because of reports that the Citroen DS3 R3 Max cars were fitted with electric water pumps that were never homologated at the FIA. They retained their Junior points and thereby Quentin Gilbert was still confirmed as Junior Champion. Tempestini (also a DS3 R3 Max driver but a non-JWRC driver, whose car had not been inspected) and Crugnola (Renault Clio Turbo) were elevated to first and second places in the category and consequently improved their standings in the series. Coming to Spain four drivers were now in contention for the title: Quentin Gilbert, Ole Christian Veiby, Simone Tempestini and Andrea Crugnola. Gilbert was fastest and continued to lead through the first full day ahead of Tempestini and Terry Folb while Veiby, who had been lying second, impacted a bridge on the first run of Terra Alta. Gilbert was three minutes late leaving service at the start of Day 2 which dropped him to second place with Tempestini taking the lead. On stage 13 Tempestini stopped with a puncture but had difficulty to change the wheel and lost three minutes which dropped him back to fourth. Gilbert was back in the lead ahead of Folb and the Peugeot of Fabio Andolfi. Crugnola had a terrible event retiring four times (!), on the Thursday evening with a flat battery (incurring a ten minute penalty), on Friday with a radiator leak and again on Saturday and Sunday with engine overheating. Quentin Gilbert cruised to victory ahead of Terry Folb and the Peugeot of Fabio Andolfi. Drivers in the Junior World Rally Championship and had not been affected by the homologation crisis.

Catalunya Rally counted as a double event for the DriveDMack Fiesta Trophy, which developed into a battle between Marius Aasen and Tom Cave. Aasen won both events and the series, second in the category was Brendan Reeves who was not eligible for points scoring and third was Cave who lost eight minutes off the road. Max Vatanen was badly delayed on the Friday by a loose turbocharger pipe. British driver Gus Greensmith was winner of the DDFT Rookie Award.

Going into the final round, behind Volkswagen the other Manufacturers' standings were still wide open between Citroen and Hyundai with M-Sport with the outside chance of gaining second place. Second and third positions in the Drivers' series were secure for Latvala and Mikkelsen, but who finishes where is undecided. In WRC2 with Al Attiyah taking the Drivers' title, the Production Car category was still open with the top two placed drivers unable to increase their scores further, it rests on whether Carchat and Foulon enter Wales Rally GB for any early outcome. In WRC3 the title race was down to between Gilbert (with a zero score to drop) and Tempestini (with 1 point to drop).