WRC 2014: Ogier is world champion for the second year in a row 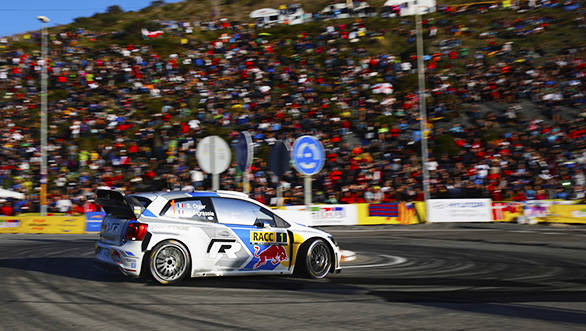 Sebastien Ogier clinched his second successive outright world rally championship title when he cruised to victory on the mixed surface Rallye Catalunya ahead of his Volkswagen team-mate Jari-Matti Latvala, who was the fastest driver on the event. This title has come six years after Ogier won the Junior World Championship in 2008, in his Citroen two-wheel-drive days and his first season in the WRC. Third position on the event for Mikko Hirvonen brought M-Sport their only podium result for six months. Titles were also won on the event by Max Rendina (the FIA Production Car Cup) and Sander Parn who won the Drive DMack Fiesta Trophy. Nasser Al Attiyah cruised to victory in the WRC2 category which put him as firm favourite to win that title against Jari Ketomaa who is now the only other remaining contender. 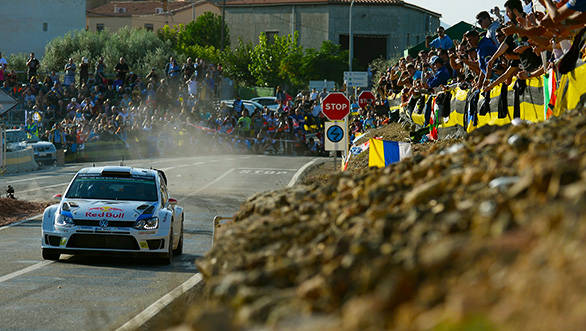 Jari-Matti Latvala finished the first leg of the event in second place but 36.3 seconds behind Ogier

Latvala's wish to be champion was always going to be a long shot, but Jari-Matti's problem started before the event even began. "One thinks of Catalunya as an asphalt event and I mentally prepared myself for asphalt driving and the way you must win on asphalt. This year the gravel stages came first and I was completely ill at ease on the first day." He finished the first leg of the event in second place but 36.3 seconds behind Ogier, whose first running position on the road had meant the reigning champion was spared the hanging dust. To catch Ogier after that was an unachievable challenge. Latvala did his best, winning nine asphalt stages and finishing the event 11.3 seconds behind the winner. Even if Latvala had beaten Ogier here in Spain, Ogier would still have won the title but that did not faze the Finn. "I was not going to let him win the title without a fight !" Hopes for a VW 1-2-3 this time were dashed on the first leg when Andreas Mikkelsen had to drive through hanging dust on stage 3. Mikkelsen, "I could not see a thing. Terrible. Very dangerous." On the asphalt stages however he pressed on, momentarily reaching third place overall but then he had a tyre failure on stage 11. Mikkelsen was in line to finish sixth but a time control penalty dropped him behind Neuville to seventh.

Delight of the rally was watching Hirvonen, on an event on which he has often gone well. Hirvonen, "I have been very happy, and on the asphalt stages I must be the only driver really happy with the new Michelin tyres". This was the first time Michelin's new generation asphalt tyres had been used in such warm conditions, and there were instances of delamination of the tread, including, dramatically, when a 20cm strip of tread was lost from one of Ogier's tyres on the second run through the long 50km stage on Day 2. Hirvonen's team-mate Elfyn Evans approached the event cautiously but on stage 3 he slid off and stalled in the dust, lost a minute off the road on stage 5, and then went off the road for the rest of the day on stage 6. Not an event to remember.

Over at Citroen, Kris Meeke also had an event to forget. Going off on stage 3 and suffering two punctures  when he was only carrying one spare. To his chagrin he then discovered he had baulked his team-mate Mads Ostberg while he was struggling to reach the end of the stage. Mads still managed to hold third place through the Friday afternoon, but immediately the rally reached the tarmac, on Saturday, firstly Mikkelsen caught and passed him and then so did Hirvonen. Although having no hope of finishing in the top ten, Meeke restarted the event and was the fastest non-VW driver on the rally.

Things started so well for Hyundai. Neuville leading after the third stage, but his hopes were dashed when he slid off the road and touched a rock when distracted by dust inside the car. He punctured a tyre and critically damaged the bodywork. He had to stop and change the wheel mid-stage and lost a couple of minutes, which dropped him out of contention for a top result. The bodywork damage was critical because the rally officials discovered, during routine car weight checks, that the car was 5kg underweight. The stewards were persuaded the missing bodywork caused the inadvertent illegality! Dani Sordo, was the best placed local driver finishing in fifth place, while Neuville finished sixth. Hayden Paddon, in the Hyundai N team, finished ninth on his first WRC asphalt event, and scored one of two fastest times by Hyundai drivers on the event, and the first WRC scratch time by a New Zealand driver this millennium! All three cars suffered serious handling trouble on the final day. 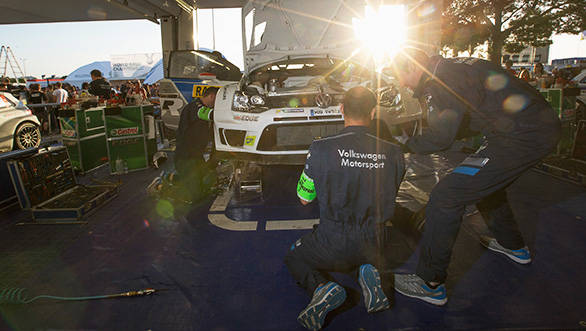 Once again Martin Prokop had a strong event finishing eighth, despite suffering a strange gearbox problem on Day 2 while Ken Block, on his first WRC event this year, was lying as high as ninth but then punctured on the Power Stage, so Nasser Al Attiyah rounded off the leader board in tenth. Robert Kubica rose as high as sixth on the gravel but then went off the road on Day 2.

The race to the WRC2 title is hotting up with Nasser Al Attiyah scoring his fourth maximum score of the year, with everything to fight for on the final round of the season, Wales Rally GB in mid-November. There are now two drivers able to win the title, but Karl Kruuda is now out of the frame, after losing a lot of time off the road on Day 1. This was Nasser's first career win on asphalt. Sebastien Chardonnet led the category after the opening superspecial stage in Barcelona on Thursday evening and held second place through most of Friday until he stopped with clutch problems on his Citroen R5 before going off the road. Bernardo Sousa started strongly but then went off the road, while Stephane Lefebvre, already the WRC3 champion, forsook the chance to win the ERC Junior series at Valais for a prize drive in a Citroen R5 but also went off the road. Al Attiyah finished in the top ten overall, winning the WRC2 category in his Fiesta RRC on Michelins ahead of the R5s of Julien Maurin (Pirelli), Robert Barrable and Nicolas Fuchs. The best non Ford finisher in the category was the Mini JCW of Valeriy Gorban in fifth. Mohamed Al Mutawaa, the only competitor in WRC3 scored maximum points. 2012 Production Car champion Benito Guerra from Mexico won the Production Car division but Juan Carlo Alonso retired after going off the road, thereby gifting the title to the absent Max Rendina. The main title left to settle in GB is that for the WRC2 Drivers', now between Autotek team-mates Nasser Al Attiyah and Jari Ketomaa.

Tom Cave came to the final round of the Drive DMack Fiesta Trophy with the odds against him beating Sander Parn to the title. His hopes effectively ended on the final morning when he slid off the road and lost three minutes regaining the road. Parn however did not have a trouble free run, having his own worries after he brushed against a barrier at very high speed. The category on the event was eventually won by Nils Solans while Sander Parn gained the DDFT title in its inaugural year.