The second round of the first ever World Rallycross Championship at Lydden Hill, UK saw Ford Olsbergs MSE driver Andreas Bakkerud take the winners trophy after a fantastic weekend. The Norwegian finished ahead of Swede Robin Larsson who was making his international Supercar debut. Behind the duo was another surprise showing on the podium, British TouringCar Champion Andrew Jordan who was making a comeback to the Supercar segment. It wasn't quite the day for Petter Solberg though who had won the first round in Portugal.

The experienced Solberg who headed into the final winning heat two and four, crashed into VW Marklund Motorsport driver Tanner Foust in an attempt to overtake the American. However he was able to finish the race, having to settle for sixth. The semi-finals saw Tanner Foust being promoted to the final after Latvian Renis Nitiss had a rather tragic end to his fantastic run. Renis had finished on top in the second semi-final but an electrical problem soon after the win saw him out of the final. 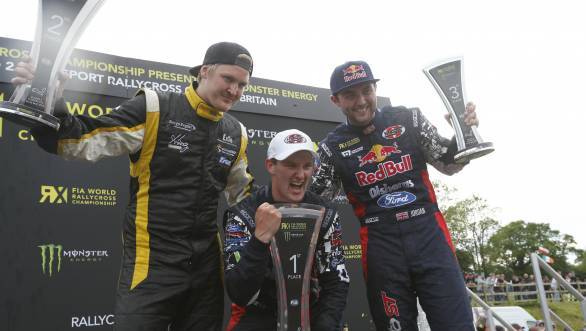 Things were still not the best for homeboy Liam Doran either, who had a better showing but didn't pick up any points his team, Monster Energy World RX. Team Peugeot-Hansen too had a disappointing weekend with both their driver Timur Timerzyanov and Timmy Hansen bowing out with engine problems. But with two leading Norwegians and only six points separating the top six as per the driver's standings, the next round in Norway undoubtedly has a lot of drama in store. Keep watching this space as we keep you updated.