The Perusahaan Otomobil Kedua Sendirian Berhad, usually referred as Perodua, is Malaysia's largest car manufacturer followed by Proton. The company launched the third-generation car in the local market just a few days ago. The Perodua Myvi is one of the more popular cars in the Malaysian market for it is seen as a value for money offering. And now, rendering artist Theophilus Chin has released an image of what could be the 2018 Perodua Myvi SE hot hatch or a spruced up version of the Myvi hatch. The 2018 Perodua Myvi SE hatch, according to the artist, gets a honeycomb grille with larger air intakes to make it look sportier than the regular offering. The headlight cluster has been updated with LED DRLs. To the side, the 2018 Perodua Myvi SE runs on larger two-tone wheels with sporty alloys and gets contrasting silver door mirrors. On the rear, the tail light design has been changed for a sleeker L-shaped unit. Additionally, there is a large spoiler with a brake light that flows between the tail lights and a small diffuser that has been positioned under the rear number plate. 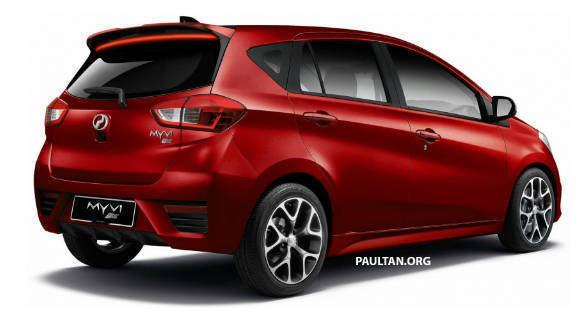 Powering the regular Perodua Myvi are the new 1.3 and 1.5 litre Dual VVT-i engines that are also seen in Toyotas. The 1.3L motor makes 94PS at 6,000rpm and generates 121Nm at 4,000rpm. The larger 1.5L motor puts out 102PS at 6,000rpm and produces 136Nm at 4,200rpm. These motors are mated with a 5-speed and a 4-speed manual transmission units. Considering the fact that Perodua has not ventured into making a larger motor than the 1.5 nor has it made a spruced up version in the past, the 2018 Perodua Myvi SE might only remain as an interesting rendering. Would you like something like this to enter India? Let us know in the comments section below.