Swedish bus maker Volvo has just concluded tests of its new electric bus on the streets of Gothenburg, Sweden's second largest city. The bus was tested amid regular traffic to study it in real word conditions. Volvo says that it is fine tuning the bus before launching it on June 15, 2015 in Gothenburg itself.

The bus is 10.7 metres long and can accommodate up to 86 passengers. The driver sits in the centre of the bus a la the Mclaren F1 hypercar. Volvo says that the bus is designed to offer a modern and welcoming atmosphere. The bus is fitted with sockets to charge mobile phones as well as has onboard WiFi.

Volvo says that a new bus route between Lindholmen and Chalmers/Johanneberg in Gothenburg will be started from mid-June. Three of its all-electric and seven of its hybrid buses will ply on this route. The buses are equipped with quick-charge battery packs that can be replenished using renewable electricity. The energy consumption of the bus is 80 per cent lower than that of diesel buses, says Volvo. 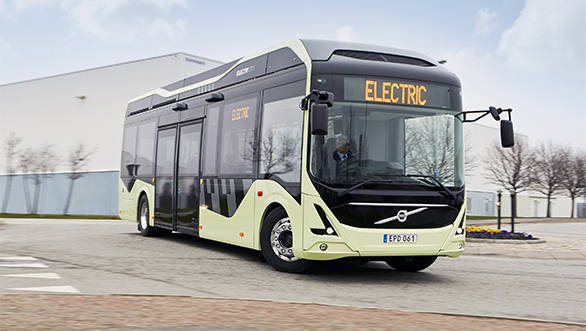 The new bus route is part of a cooperative venture called ElectriCity, which is a collaboration between  researchers, industry and city planners. The purpose of ElectriCity is to develop and evaluate future based, sustainable transport.

Speaking about the new electric bus Håkan Agnevall, president of Volvo Buses said, "Right now we are carrying out final testing to ensure everything works just as it should when regular traffic gets under way. This marks a major milestone in our development of new solutions for electrified buses. Quiet and entirely exhaust-free operation will contribute both to a better urban environment and reduced climate impact, while passengers get a more pleasant ride."

He also spoke about passenger amenities saying, "For instance, all boarding and exiting is quick and convenient via an extra-wide door opening with a low entry in the middle of the bus. Here there is a large area with a low, flat floor to make things easier for passengers with child buggies or wheelchairs."

The bus will be commercially produced 2017 onwards.

Volvo's first electric bus now on the roads of Gothenburg