Yes we petrolheads love to try our hands at everything with an engine and wheels, and the 2016 Volvo Trucks India Fuel Watch Challenge presented a unique opportunity.

I've always been fascinated about trucks and have always wondered how it will feel like to drive one.

So it goes without saying that I was elated when GV Rao, vice president, product strategy and brand marketing for Volvo Trucks India offered me a chance to get behind the wheel of the Volvo FMX 440 8x4 Tipper truck. It was an interesting experience. 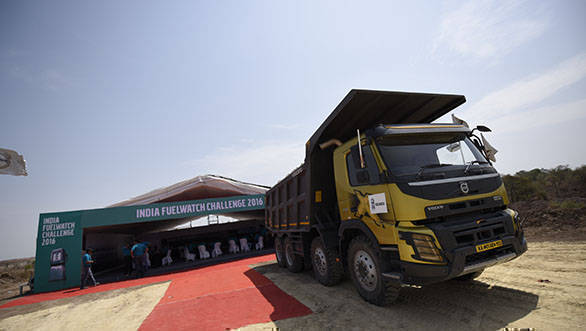 The truck is quite thoughtfully designed - the Volvo FMX 440 8X4 is built to move earth at mining sites across the globe. Which means it's really tall and has an imposing stance. It has 300mm of ground clearance. That kind of clearance is required since huge boulders abound on a mining/construction site. The designers have also designed the underbody quite cleverly, using all of Volvo's truck design experience in the FMX. The front axle, for instance is moved as further forward as possible, lending the FMX with an improved approach angle (28 degrees). There is a high strength protection plate, that shields the radiator and other vitals of the truck. A skid plate underneath doubles up as the oil sump guard. It's designed to resist up to four and half tonnes of impact from an object the size of the human wrist.

The cab is designed quite well too. I spent a lot of time gazing at the truck, and that's because I couldn't get over the way the truck looks. Yes, it's that good looking. Especially when you compare it to the millions of regular trucks that dot our highway. This Volvo sure makes them look like that they belong to the stone age. 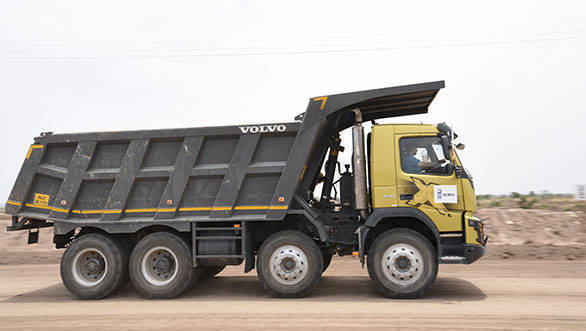 The FMX 440 8x4's cabin is sprung on all four corners, at the point where it sits on the chassis. This isolates the driver from the treacherous terrain in a mine. The corners of the truck are vulnerable and hence, Volvo has made the bumper corners out of three-millimetre thick high grade steel.

The body panels are split and not overlapping, which means damage to a particular section is isolated and easy to replace. There is a huge towing member, made entirely of cast iron that's located behind the body panels, with a capacity to tow 25 tonnes.

The headlamps are huge with a protective mesh grille to keep stones from breaking the unit. Mining operations run round the clock and I've been told by the drivers that the 300-metre long beam is quite helpful. 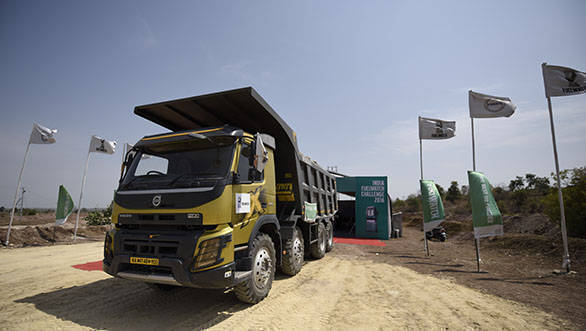 The V-shaped LED DRLs look cool and coupled with the huge, blacked out grille, give the FMX a striking face. I was also impressed with the paint quality on the cab. It's at par with what you see on cars and I quite like the graphics on the doors.

The interior too were unexpectedly well appointed for a truck 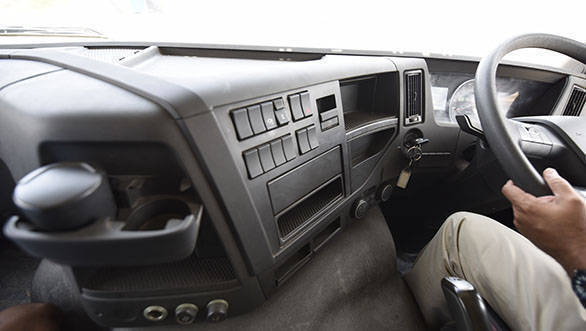 The moment I climbed into the air-conditioned cabin I was surprised. The adjustable seat (can be adjusted 20 cm fore-aft and 10 cm vertically) is really well contoured and is upholstered in mix of leather and fabric. The seat is air-suspended which does a terrific job of ironing out the bumps. A few drivers also said, that the air-seat system in conjunction with the truck's air-suspension system makes them feel as if they are gliding across the terrain. This also helps reduce driver fatigue, and many of the drivers feel fresh even after an eight hour duty.

The driver's side of the cabin is contoured in such as way that every switch and button is within easy reach, including the music system. There are a plethora of stowage spaces in the overhead cabinets as well as cubby holes around the dashboard.

The space inside is utilised quite judiciously, and that's apparent in two features. The first is the parking brake that's operated electronically via a switch on the dashboard. The second is the pedal to adjust the huge steering wheel. It is located above the accelerator pedal, and I found it quite easy to operate.All I had to do was keep it depressed. This allows tilt and telescopic adjustment of the steering wheel which in turn made it easier for me to set the right driving position. Once set, I'd release the pedal and the steering was set to my preference.

The steering wheel has controls for audio, cruise control, audio, phone and information displays on the instrument cluster. In a nutshell, it felt like I was seated in a gargantuan van. "It's just like driving a car, only bigger" is what GV Rao said as I walked towards the truck. From inside, the view makes you feel like you are seated in a tower. I was imagining how cars and other vehicles would look like, and I'm pretty sure that if I was driving the truck on a motorway, I'd have the best visibility of all.

The throttle is quite responsive, and I could feel the power (440PS) and torque (2,200Nm) of the 13-litre D13A diesel engine make easy work of the terrain. There's a differential lock, operated via a switch on the dashboard that lets you send the power to the wheels with the maximum traction.

The variant of the FMX that I got my hands on was equipped with Volvo's brilliant i-Shift (short for intelligent shift) automatic transmission that made it easier for me to concentrate on driving. The system's ECU gauges the load, engine rpm, road grade, torque demand, speed and other information to ensure that the truck is always in the right gear. The shifts were seamless and I was always in the torque band, no matter what speed or gradient of the road. This was rather helpful when negotiating a tight uphill U-turn (typical scenario at a mining site) where maintaining momentum was key.

What also helped was the power steering system. The steering felt very light at low speeds and it barely requires any effort to turn the behemoth. (This truck had two steerable axles that reduced the turning radius) The system consists of an electric motor that's fitted above the steering gear. At low speeds you get up to an 85 per cent increase in steering force which made maneuvering around obstacles a piece of cake for a first time truck driver like me. 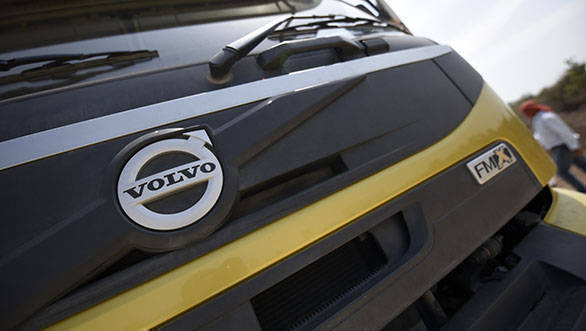 As far as braking is concerned, this variant of the FMX has drum brakes, which felt more like an on and off switch. Everytime I braked, there was no initial bite (we're so accustomed to disc brakes) after which it stops in an instant. For mining and construction applications, the braking is more than adequate.

On the move, you do not feel a thing. The cabin is well insulated and you can barely hear the engine as you drive in the air-conditioned comfort. I felt as if I could do this all day, and that's all because the Volvo FMX makes it all too easy for the driver.

At the end of the day, I discovered a newfound respect for truckers; their job is very difficult. This is especially true in the case of drivers who drive ill-maintained, old-school trucks over long hours, for days on end. There's a flat seat, heavy steering, heavy clutch, sluggish manual gearbox and no air-conditioning to deal with. The brakes are usually iffy and there's a serious lack of power when these trucks are loaded to the brim. I'm sure you've seen many trucks struggle to climb up mountain roads and it can get quite frustrating for the driver.

Trucks like the Volvo FMX, which is akin to driving a Mercedes-Benz E-Class in the trucking world, is far more easier to drive. The modern amenities also makes it easier to live with and I feel such trucks are the need of the hour in the country. It goes without saying that the fewer breakdowns (Volvos are designed to run 24/7) and increased up-time that such trucks manage will dramatically improve the profitability of any business, which in turn will be beneficial for the country. 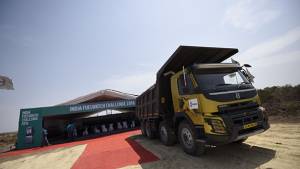