Volkswagen Twin-Up! to be showcased at the 2013 Tokyo Motor Show

There will be another eco-friendly addition to Volkswagen's lineup for the upcoming Tokyo Motor Show. Sharing space with the all-electric e-Up! will be the new diesel hybrid Twin-Up!. According to the carmaker, this hybrid has the potential to be perfected into a production model.

Both Twin-Up! and e-Up! are based on the city car Up!. Reports suggest that the powertrain comes from another super-efficient Volkswagen hybrid, the XL1. Power comes from the uprated electric motor synced to an 8.6 kWh battery and a 33 litre diesel tank. The engine is an 800cc twin cylinder common rail diesel that gets a transverse installation. It develops 47PS of power and 119Nm of peak torque while the motor is good for another 47PS of power and 139Nm of torque. This leads to an overall output of 75PS and 214Nm of peak torque. The assembly is completed with a dual-clutch 7-speed gearbox. It weighs 1,205 kg, which is 250 kg more than the Up!, the car it is based on and 250kg more than the XL1, the car it draws the engine from. 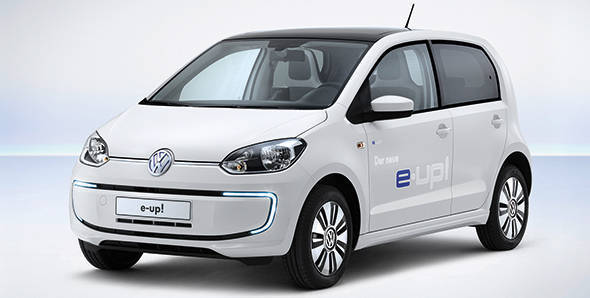 The E-Up! is the all-electric version which will be sharing stage with the Twin-Up! at the 2013 Tokyo Motor Show

Claims are that the car takes 15.7 seconds to sprint from 0-100kmph. The top-speed is electronically capped at 140kmph. Efficiency claimed is at a whopping 91kmpl with CO2 emissions of just 27g/km. It also boasts of an electric-only range of around 50 kms. On the all-electric trip, it can reach top-speeds of around 125kmph.

The Up! is Volkswagen's two-door small car that is powered by a 1.0-litre three cylinder engine. The XL1 on the other hand is  a 1-litre car. This two-door was designed to deliver 100kms on a litre of diesel. The production model of the XL1 was unveiled at the 2013 Geneva Show. Volkswagen said that production would begin by mid-2013 and that it would be limited to 200 units. The XL1s go on sale in Europe next year at a base price of 111,000 euros.

With Volkswagen claiming that it is looking at a production model of this diesel hybrid, it is an indication that the brand refuses to lag behind in the race to produce environment-friendly passenger cars. Closer home, Volkswagen is still to bring the Up! here because of the very small dimensions and pricing issues. But they could be working on a longer wheelbase Up! that is priced lower than the Polo.