Volkswagen to launch the Polo facelift in India by July 2014

Volkswagen had unveiled the Polo facelift at the Geneva Motor Show 2014 and had announced plans that it will be bringing it down to the Indian market in the second half of this year. Our sources now say that VW India has locked in July as the time when the facelifted Polo will be launched. Apart from cosmetic changes, the new Polo will also have mechanical changes.

The most significant of all revisions though lies under the hood. The facelifted Polo will have a new 1.5-litre 4-cylinder diesel motor. This motor has been downsized from the current 1.6 and is expected to make the same power and torque figures as the latter (105PS/250Nm). The engine will be mated to a DSG automatic gearbox. This move will also help Volkswagen to get excise benefits applicable to cars under 4m and with 1.5l diesel engines. There are also chances that Volkswagen may discontinue the current 1.2l diesel motor in favour of this new 1.5. However, whether the management takes this decision with the resultant higher fuel efficiency of the 1.2l over the 1.5l remains to be seen. 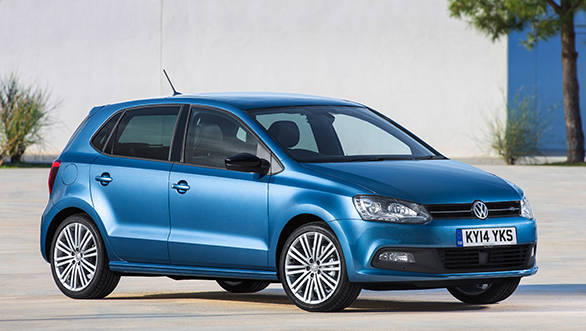 Internationally there are a range of engines available for the Polo but we believe Volkswagen will persist with the current crop of engines that they have on offer here. Which means a 105PS 1.2 turbo petrol and a 75PS 1.2 3-cylinder NA petrol. The 75PS engines will come mated to 5-speed manual transmissions while the turbo petrol will have a DSG box. Expect the prices to be a tad more than that of the outgoing car.

Volkswagen will further use this 1.5l engine in the Vento and thereafter in the Skoda Fabia and Rapid.

Click here for the image gallery of the new Volkswagen Polo