The MotoGP race weekend at Valencia is getting as thrilling as it could. Intermittent rains had the teams in a tizzy with wet conditions prevailing on Friday and then continuing during the first half of Saturday. But the sun came out in the second half, drying up most of the track and allowing riders to come out on slicks, thus making for some edge of the seat action in the qualifying sessions. Yamaha factory racer Maverick Vinales stormed to pole position, lapping the Ricardo Tormo Circuit in 1 minute, 31.312 seconds ahead of Suzuki's Alex Rins who will take second place on the starting grid, followed by the factory Ducati of Andrea Dovizioso. 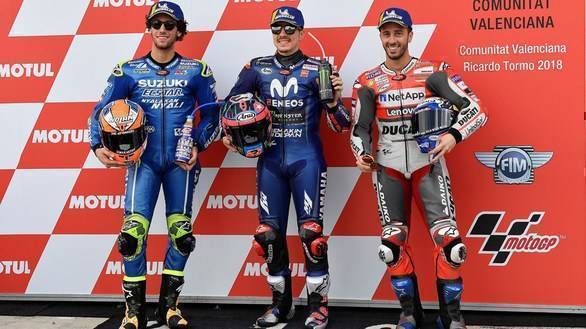 Maverick Vinales (centre) has secured pole position at the 2018 MotoGP season finale at Valencia for the factory Yamaha team, followed by Aleix Rins (factory Suzuki) in second and Andrea Dovizioso of Ducati in third

Crowd favourite Marc Marquez, who recently wrapped up the 2018 championship, crashed out on his first flying lap itself and though he was quick to get back to his feet, he was seen clutching his left shoulder, which obviously was hurt. Barely minutes later the Spaniard was back on track after a quick trip to his physio and managed to qualify in fifth place on the grid, behind Alma Pramac Racing's Danilo Petrucci, who secured fourth place. Pol Espargaro came in sixth on his factory KTM while his brother Aleix managed to secure eighth place for Aprilia Racing, trailing the factory Suzuki of Andrea Iannone who will start the race in seventh place, also his last for Suzuki. 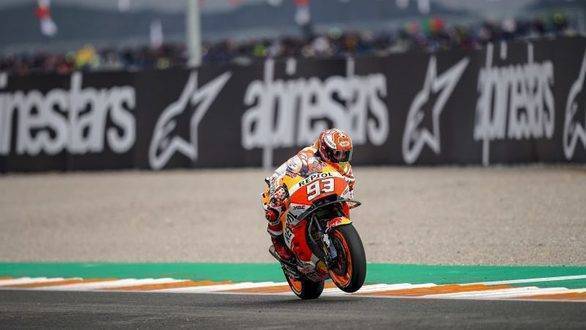 Dani Pedrosa, who retires after Sunday's race at Valencia could only manage ninth place for what is his last MotoGP race ever. Rounding up the top ten was Jack Miller, who has had a miserable weekend so far, with as many as four crashes already. Johann Zarco crashed out too, though prior to his fall the Frenchman was quick enough to pose a threat to the factory riders ahead of him. He ended the qualifying sessions in 11th place. Valentino Rossi seemed to lack pace as he struggled in FP4 and Q1 both and missed the cut to make it to Q2 only managed a rather miserable 16th place on the grid. Jorge Lorenzo, who missed the past couple of rounds owing to his injury, managed to secure 13th place but seemed to be in pain even today.

Below is the full line-up of riders for the race: