Ken Block is back with another Gymkhana video. This time from an industrial estate somewhere in the USA. Piloting his 2016 World Rally Cross Ford Focus RS, which puts out 608PS of power and 894Nm of torque, Block starts off from what looks like an old run-down factory. The Focus RS RX is on a revolving platform when Ken gets into the car. Once it's time, he shifts into first, tugs on the giant blue 'Hoonigan' handbrake lever and eventually lets the car fly off the ramp to begin a gymkhana session that is even better than the last.

The scene where he does donuts on the edge of a pier, with one wheel almost going over the side, will have you on the edge of your seat. At one point, Block drifts the Focus RS RX around a suspended Ford F150 pick-up truck, hovering just above the ground, which itself is rotating. The car will make an appearance in the new Xbox One game Forza Horizon 3, giving you the option to drive the beast. 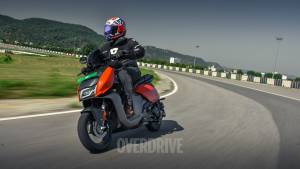