If you don't know who Dougie Lampkin is then you should really go look him up first. Lampkin is the winningest motorcycle champion we know of. Though his sport of choice, motorcycle trials isn't as popular or followed in our side of the world as, say, MotoGP.

But let this serve as a dramatic introduction for the uninitiated. This video is directed by Stu Thompson who also directs many Danny MacAskill (surely you've heard of him) videos. Lampkin rides his wee trials machine through an impossibly nice winter land over stuff he has trouble walking around in. The rest is Lampkin magic set to a wistful song with the overlay of the rasp of a trials bike motor. Enjoy. 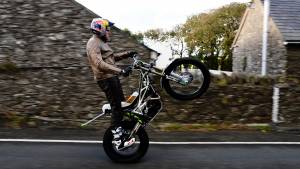