Video: Jaguar Land Rover bring you tech to spot motorcyclists on the road

A driver has a limited view of the road from where s/he sits. There are blind spots which make it difficult for the driver to notice pedestrians, cyclists and motorcycle riders. There could be a motorcyclist coming your way around a bend, who you may fail to see. Or there could be a cyclist who is about to come alongside the car as you are about to open the door. Often, accidents occur when drivers fail to spot these hazards.

So, in order to alert the driver and avoid mishaps, Jaguar Land Rover is developing a new set of technologies that will use sight, sound and touch to notify the driver about an oncoming hazard. The car is fitted with sensors all around which scan the surroundings and identify cyclists and motorcyclists. So when a bicycle is about to pass the car or a motorcycle is about ride by, the car's speakers corresponding to the direction of approach will sound a bicycle bell or motorcycle horn. When a motorcyclist is coming up from say, behind the car and is set to overtake the vehicle from the right, the top part of the driver's seat will pat the right shoulder of the driver, making the driver instinctively look over the right shoulder. In another situation, if a driver is about to overtake a large vehicle like a truck, which obscures the driver's vision and if a pedestrian or vehicle is about to cross, the accelerator pedal vibrates or becomes stiff, making the driver aware of the road users around  him or her. 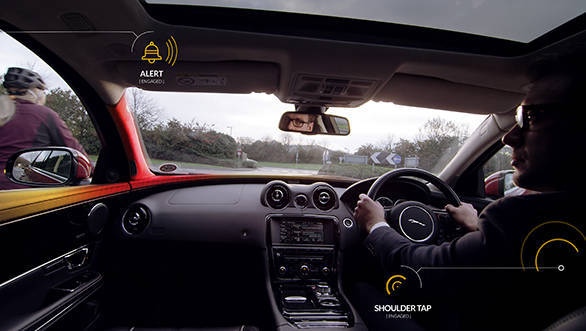 With Bike Sense, the car is also fitted with a matrix of LED lights that wrap around the front window sill, windscreen pillar and dashboard, which glow in a shade of amber and progress to deep red as a cyclist or motorcyclist approaches and goes past. This indication again, is relative to the direction of the approaching rider.Also, when you are about to alight from the car and a cyclist is about to ride past, Bike Sense will make the door handle vibrate along with lighting up the LEDs around the handle and window sill, preventing the driver from opening the door into the path of the approaching rider. Dr Wolfgang Epple, director of research and technology, Jaguar Land Rover, said, "By engaging the instincts, Bike Sense has the potential to bridge the gap between the safety and hazard detection systems in the car and the driver and their passengers." He also added that," This could reduce the risk of accidents with all road users by increasing the speed of response and ensuring the correct action is taken to prevent the accident from happening."

Watch this technology in action here: