Lamborghini recently showed us the Huracan Evo, a more efficient, aerodynamic and quicker development of the earlier Huracan. Given how a convertible version of a relatively mainstream Lamborghini car is never far away, it is no surprise that spy pictures have emerged of the Lamborghini Huracan Evo Spyder.

The hardtop Hurancan Evo runs on a lot of tech derived from the Performante. Consequently, the roof mechanism on the Evo Spyder could also be very similar to the one in the Performante Spyder. The Performante's soft-top is weatherproof and can be deployed at speeds of up to 50kmph. A separately controlled rear screen is also available which doubles up as a wind deflector. 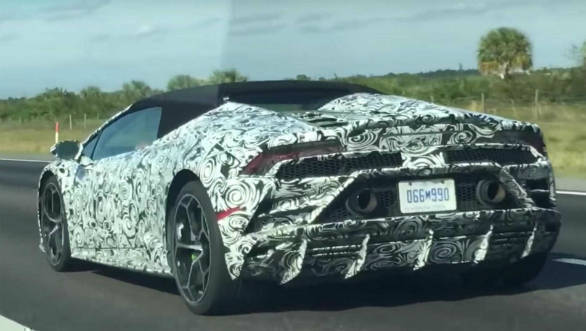 Other than this, the changes seen on the Evo will also make it to the convertible.

The 5.2 litre V10 motor gets titanium intake valves and a lightweight exhaust system. This makes 640PS and 600Nm, up around 28PS from the standard Huracan. This is paired with a seven-speed dual clutch automatic and an all-wheel drive system. Other notable performance enhancements are the addition of rear-wheel steering function, a new ECU has also been added called Lamborghini Dinamica Veicolo Integrata (LDVI). The basic shape remains unchanged but it now gets a new more aggressive bumper which highlight the y-motifs seen across Lamborghini's cars. There are now two ridges which run along the bonnet, a Countach inspiration. Also new are the hexagonal air intakes on the side and the high-mounted twin-exhausts which are reminiscent of the race-spec Huracan GT3. The Evo also gets a new 20-inch Aesir alloy wheel design and a new Arancio Xanto paint option. The biggest addition to the interior is the new 8.4-inch vertically stacked touchscreen infotainment screen and new trim and material options.

Expect the Evo Spyder to be on sale by the latter half of 2019, a 10 per cent price premium over the hardtop Evo can also be expected. 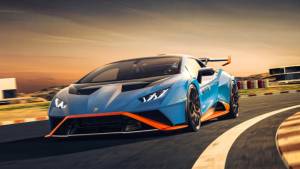