The All India Tyre Dealer's Federation (AITDF) is now seeking the removal of the anti-dumping duty on tyres as well as import restrictions on foreign tyre brands enforced in June 2020, which together with the recent outing of news of price rigging and cartelisation from domestic tyre manufacturers, has long since put both the retailer and consumer at a disadvantage during the pandemic. Recently, the Competition Commission of India (CCI) levied a Rs 1,788cr fine against five domestic tyre manufacturers (Apollo Tyres, MRF, Ceat, JK Tyres, and Birla Tyres) and their association, the Automotive Tyre Manufacturers Association (ATMA), for price rigging and cartelisation over the last decade or more. The AITDF argues that domestic tyre manufacturers have lost their right to enjoy any competition protection afforded by import restrictions, as well as anti-dumping laws, as they have themselves cartelised the market and put consumers and dealers at a loss. In its letter to the government seeking an appointment, the AITDF also asked for a reversal of the price hikes that domestic tyre makers have imposed.

While it is yet unclear if the domestic tyre manufacturers will appeal the fine or not, what is clear is that if the government does indeed lift import restrictions, the issues faced by owners looking for replacement tyres for their vehicles, be it two-wheelers (motorised/cycles), four-wheelers (cars, LCVs, HCVs) could finally have an end in sight. Ever since the ban, it has been increasingly difficult for customers to find high quality tyres in the sizes required, since most domestic tyre manufacturers produce tyres in limited sizes.

Apollo Tyres, MRF and others handed penalties by CCI for 'indulging in cartelisation' 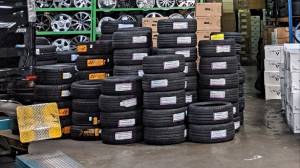