It's that time of the year again. The time of the year when the clouds burst open and torrential rain pelts down on the hustle and bustle of Mumbai City. The roads disappear under water, the potholes add considerable challenges for everyone, and god forbid there might be some mud on the roads. The term road ceases to apply and can be rather handily replaced with words such as quagmire, morass and quicksand. 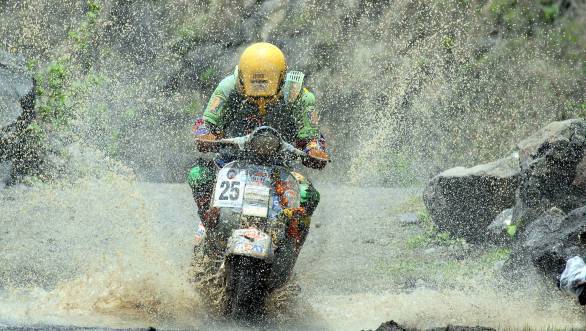 In this scenario, when the very thought of venturing out into the elements causes the bravest of men to quake and quiver, there are others. A special breed of men and women who use this as an opportunity to head out on a bunch of scooters and see which one of them can be the fastest over the wet roads (if you can call them that) that comprise the Gulf Monsoon Scooter Rally's stages. And in it's 25th edition, the Gulf Monsoon Scooter Rally was as exciting a showdown as ever, with 36 riders braving the vagaries of the weather in the quest for victory.

There were big names competing in the 2014 edition of the event, with several past winners of this gruelling contest returning to a somewhat familiar battleground. Defending champion Muzaffar Ali from Bhopal was set to lock horns with four-time winner Manjeet Singh Bassan, three-time winner Shamim Khan, the twice victorious Rustom Patel, and former winners Kunal Rao and Avtar Singh. Add to that the fact that the TVS Racing Team had their own knight in riding armour in the form of R Nataraj and things were set to be very exciting. 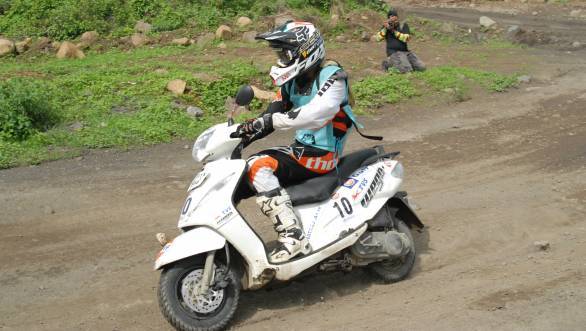 And while it was only Nataraj's second attempt at the Gulf Monsoon Scooter Rally, where he placed third last year, this time around he really had his eye on the prize. The Bangalore-based rider came, saw and conquered the slippery battlefield quite dominantly, never letting the lead out of his hands. It was a close race though, with Shamim Khan chasing him all the way through, but there was no denying Nataraj his win. He finished with a 00:27:30 seconds in penalties, while Shamim Khan was four seconds adrift, with third-placed Muzaffar Ali a further three seconds slower.

The stages caught out many a rider though, with nearly every single one of them having a slip up while negotiating the tight turns and hairpin bends, and some also slipping and sliding downhill on their way to the finish line. Rustom Patel looked set for a podium finish, but wasn't able to make it to the rostrum after all, having hit a rock along the way. Fourth and fifth place went to Amit Belgaonkar and Shashank Shewale, while four-time champion Bassan only managed to finish sixth, winning the up to 160cc class along the way on his LML Vespa.