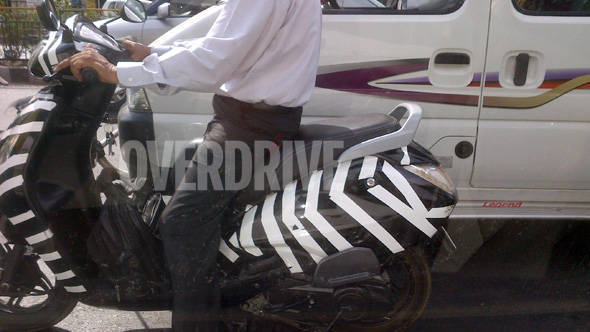 OVERDRIVE reader Prithvijit has send us this pic of the new scooter from TVS. No branding is visible on the test unit but you can see the logo on the transmission case at the rear wheel. The outer case does look identical to the Wego's. Other TVS cues include the design of the wheels and they do look like 12-inch wheels like the Wego has. The state of the prototype on test suggests that TVS is nearly ready to launch the scooter.

TVS has tasted some success with the Wego scooter but since then, sales have become steady, even as other manufacturers have either entered the market with new products, like the Yamaha Ray and Ray Z or upgraded their existing lines, like Honda did with their 'HET' equipped 60kmpl capable Activa, Aviator and Dio.

From the shape TVS seem to be aiming for the Honda Activa which is a savvy move. The Wego has been called out for its styling, which was skinny overall and that led to the perception that the scooter was smaller than the competition and other assorted perception issues. In our test, though, the Wego proved to be an excellent scooter with good engine performance, excellent handling (take a bow 12-inch wheels and telescopic suspension) and generally a solid value proposition.

TVS should have a winner on their hands if the prototype in the pic can give the impression of a broad shouldered, more masculine, substantial scooter. We do not expect to see a new engine on the scooter and if there are any updates to the powertrain or chassis (we expect the scooter to be using the Wego platform as base) then they will probably arrive on the new scooter as well as the Wego. The one change that is visible is that the telescopic fork is mounted direct to the axle here while the Wego was mounted forward of the axle.

There is the prospect of the new TVS transmission though. TVS had shown a new automatic transmission which was not a variomatic and TVS claimed significant economy benefits from this. We believe the timeline is right for the transmission to see light of day. On the other hand, TVS has been a conservative player and it would be simpler for them to make minor adjustments to powertrain and chassis to create a second scooter for their product range than to go through all the effort of manufacturing a new powertrain. If this scooter is to receive the new transmission, TVS could surprise us with a larger displacement engine for more power as well. The logic is that if you are going to make all the effort needed to graft a new transmission in, then the additional testing and validation effort for a bored/stroked motor is minimal and therefore well within the realm of possibility.

Back to what we can see then. Adding credence to our expectation of a bigger scooter are the panels. The front apron looks substantial as does the handlebar fairing, a big meter set and a rear panel that looks very much like the Activa in the pic. The dark colour does hide body definition to quite a large extent to the finished product, we expect, will look unique to itself.

Since the arrival of the Hero Maestro, there does seem to be a push to add scooters to the kitty from all the manufacturers and the unisex scooter is the obvious place to target since it remains the biggest chunk of scooter sales in India. The feminine or masculines scooters are smaller subsets, and therefore naturally will feature later on in the product plans.

The bike in the pic is not being ridden by a TVS person, it looks like the scooter is on a customer field trial where the company allows a small, select group of customers to use the scooter for a period prior to the launch to identify and solve any issues that crop up before the final production spec is frozen and the process of series production can begin.

TVS has indicated earlier that a new scooter is on the anvil but the launch is set for pre-Diwali and as such we expect to see this scooter go on commercial launch about two months from now.