Triumph Motorcycles has updated its India website with new power figures. There's some consternation about the new figures which seem to have dropped either a little or a lot more or less across the range. While the CBU models do not show significant differences, all the locally assembled models do.

Triumph actually sells two states of tunes for only one of its motorcycles across the world - the Street Triple. The places with good fuel, like Europe, usually get the higher spec while a much smaller number of markets, like Brazil, actually get a lower power specification because the fuel quality is known to be worse or inconsistent in this market. In fact, our sources tell us, that India has been identified, correctly by our reckoning, as a market with inconsistent fuel quality and a lower state of tune is safer.

The issue is that Triumph India has allowed the European specification to persist on the website with a disclaimer saying that the India website was listing European specification and the Indian spec may or may not be the same. And now, the website has been updated to reflect the actual ARAI-certified Indian figures. In other words, the website now reflects the power figures that were going into all the official registration related paperwork from day one. The new numbers are not a change in power but a change in what data the website shows.

The disclaimer may give Triumph India the legal correctness. Triumph does say the correct ARAI specification has been available at the showroom and the correct 79PS figure has been quoted in all official documentation related to vehicle registration etc. 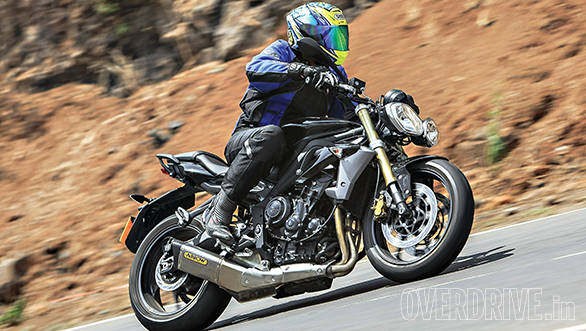 Now, in most cases, the power drop is not significant. For instance, the Bonneville line of bikes shows a drop of 7PS from 68PS to the current 61PS. This is not hard to explain. Individual bikes do display a slight variation and a variation of a few PS here and there could just be that. Since the CBU models do not go through this kind of certification, their power figures are the same as international markets.

Triumph says the measurement isn't just a difference in the actual power in most cases but due to the differences in the way the Indian ARAI approaches the measurements which are different from how various other countries do this, including Europe, where the first set of specs were taken from.

The biggest issue is the Street Triple and the Street Triple R. Triumph India listed the Euro-spec 106PS model on the Indian website as recently as a month ago. But now, the website was updated to reflect the ARAI-certified figures and that causes a steep drop in power to 79PS. That's a shocking loss of 25PS, which is a nearly 25 per cent drop in power.

The explanation is that the Indian Street Triple is actually the same specification as the Brazilian model, so the actual horsepower was 85PS from the start and not 105PS as listed.

Triumph tells us that they did initially start out showing the European spec before the motorcycles went on sale. Unfortunately, it has taken a long time to update the website to reflect the ARAI specification. They also reiterate that they were clear at every step that the specs were European spec and could vary.

Also read our story explaining how the Street Triple lost 25 per cent power.