Toyota has been going from strength to strength since its debut in the Indian market. The Japanese manufacturer entered India  in 1997 and in 2000, launched the Qualis MPV. Since then the company has been aggressively expanding its dealer network and introducing new products. On March 6, Toyota Kirloskar Motor Pvt Ltd (TKM) achieved another landmark in its Indian chapter. The company sold its one millionth vehicle, an Etios, from its Nippon Toyota dealership in Cochin.

Toyota has attributed its growth to increased localization in its products, increased dealer outlets, growing dealer network and supplier partners and an increase in manufacturing capacity to the tune of 3,10,000 units. 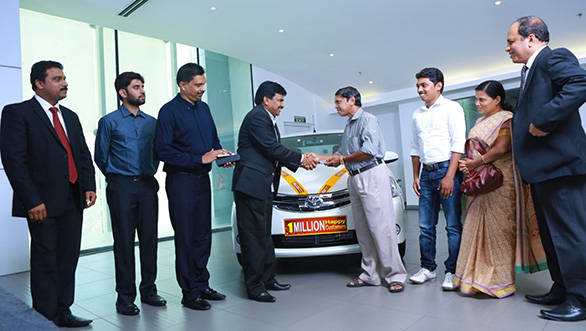 TKM has managed to maintain a sustainable growth strategy along with being a responsible corporate citizen. It has also launched social programs like Toyota Technical Training Institute (TTTI) which have given them a specialized workforce to work on their products.

Toyota has launched various offers to celebrate the realization of this milestone. A special scheme has been launched for the month of March in which customers can avail benefits up to Rs 40,000 and also get attractive finance schemes like 100 per cent on road funding, low rate of interest from its finance arm  Toyota Financial Services, India.

Speaking on the occasion, N.Raja, Sr VP, TKM said, "The sale of Toyota's one millionth car in India marks a very important milestone for us. Since its inception, Toyota has been present in the MPV/SUV segment in India and we have been market leaders ever since in these segments. It is only in 2011 that we forayed into the mass segment with the Etios & Liva and still have been able to realize this milestone in such a short duration.