Toyota Kirloskar Motor presented its new to -be- launched- in- India product, the Hiace at the 4th Bus & Special Vehicle Show. Toyota has billed this vehicle as its new, luxurious people mover for India and had showcased it at the Auto Expo 2014. Set to be launched in the second half of 2015, the Hiace will feature Toyota's tried and tested 3.0 -litre D-4D diesel powerplant that produces 136PS of power and 300Nm of torque. A four speed automatic gearbox is mated to this engine.There are four rows of seats that can accommodate a total of ten people including the driver. Toyota offers ABS and dual airbags along with a reverse parking camera on the Hiace. 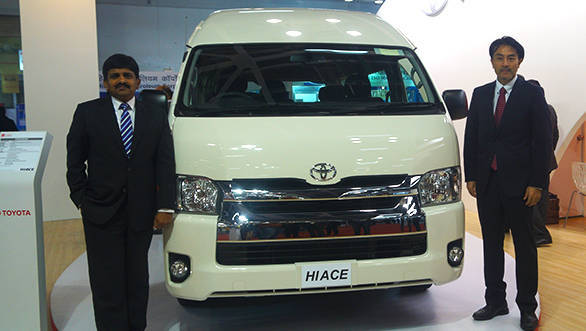 Toyota says that it has provided the 5.38 metre long Hiace with a rigid body which aids in its stability and reduces rattles and vibrations in the cabin over a long period of usage. The company sells the Hiace in over 140 countries and believes that its reliable MUV  is suited  to an array of road and climatic conditions that India can throw at it. There is no word yet on the price and positioning of the vehicle. We believe that the Hiace will be positioned over the Innova and be priced at around Rs 15 lakh.

At the show, N Raja, director and senior vice-president, Toyota Kirloskar Motor Private Limited said, ""We have been continuously studying the market for customer preferences and thus based on customer needs we are showcasing the Toyota HiAce,-a product with premium features at the 4th Bus and Special Vehicle Show. The HiAce is sold in 140 countries and has clocked sales of around 6 million units across the world. We are showcasing the HiAce for our potential business customers. The HiAce will be the first of its kind offering from Toyota in India. Like all other Toyota vehicles, the HiAce is equally designed to provide unparalleled satisfaction in terms of comfort and safety."