It was the brand that made Springfield, Massachusetts, famous and was the inspiration behind Anthony Hopkins starrer film 'The World's Fastest Indian'.

Indian Motorcycles' engine, Thunder Stroke 111, will be the base for the brand's revival. 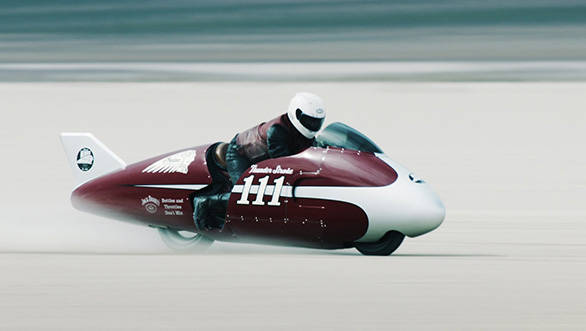 To mark this occasion, Polaris has come up with a brand new marketing tick, a high-production video clip of the 'The World's Fastest Indian'. The video - The Spirit of Munro - shows a Munro tribute bike, built by Jeb Scolman, ripping all across Coyote Dry Lake Bed, California.

Fully custom-built, the Spirit of Munro bike is an all-metal tribute to the legacy of record-breaking racing performance and strength of the Indian Motorcycle. The Streamliner was named in honour of New Zealander Burt Munro's 'The Munro Special', the historic 1920 Indian Scout that broke the under-1,000cc land-speed record in 1967 at the Bonneville Salt Flats as famously portrayed in the motion picture 'The World's Fastest Indian'.

The Streamliner topped out at 306 kmph on a qualifying run. This set the fastest, officially recorded speed on an Indian.

In the Spirit of Munro, a custom Streamliner has been built powered by the Thunder Stroke 111 and manned by rider Todd Eagan.

"This complete film project was shot in only two days. This is the first motorcycle to be publicly seen powered by the Thunder Stroke 111, and the Spirit of Munro film captures the legacy of this great brand while pushing it forward to the future," said Robert Pandya, External Relations Manager of  Indian Motorcycles.