The Victory drive with the Indian Army

Kashmir is, without a doubt, one of the most breathtaking regions in the world; get too excited by the mesmerising views and you'll literally gasp for precious air. It's why we keep generating excuses to drive and ride there. But when you get an invite to be a part of a drive organised by the Indian Army through this region, it's an extra special opportunity. After all no one, no matter how much of a seasoned guide he is, knows Kashmir better than the men who dedicate their lives to protect it. 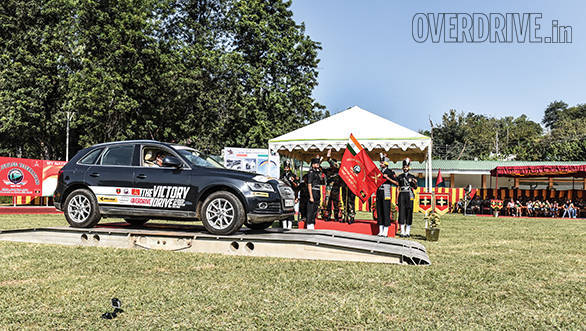 The adventure began when the Army decided to commemorate India's victory against Pakistan in the 1965 war with a car rally. It's rare for the Army to open its doors to civilians, but the exception was made for OVERDRIVE who were assigned as media partners. And to make sure we attract maximum attention to the cause, we brought along four big and flashy Audi SUVs. All in all  eight vehicles, four Gypsys and four Audis, would traverse our prized territory of Jammu and Kashmir and culminate in the national capital. Filling the machines were 21 men of which five were serving officers - Col KR Singh, Col DS Kashyap, Lt Col Amardeep Tyagi, Lt Col HS Manchanda and Major Manmeet Singh. Along with us were three veterans, Capt Surendra Soni, Capt Girish Vats and Capt Ugrasen Rana. We also had two SF Paratroopers on board for extra protection. These are the most highly trained, most advanced fighters in the entire Army. And for even more security, we almost always had an escort of a quick response team as we went through sensitive zones. This was either a Gypsy or a Casspir mine-protected vehicle full of armed men. 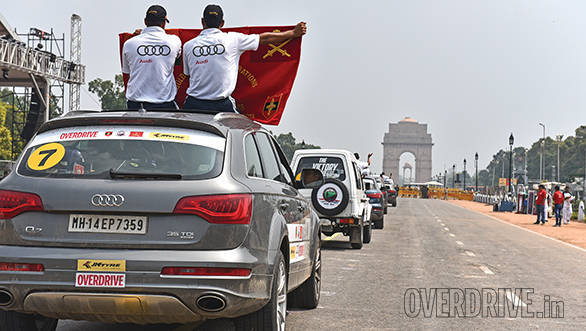 The rally was to start at Udhampur, a major Army headquarter and also a place of meaning to me as my own grandfather served here during the '65 war. Perhaps the highlight of the day was the flag-off ceremony at the Bikram Ground. One by one, our cars left the field accompanied by cheering from a large audience of nearly 600. But it wasn't just our terrestrial machines that were to entertain the crowd. As we rolled out, a helicopter hovered above the ground at an incredible height, such that it was but a pin prick in the sky. Suddenly, there were five more dots in the sky, falling towards us at what seemed to be a rather leisurely pace. We had to stop to take a look and within a few seconds, five parachutes popped into sight. It was a treat watching these highly trained paratroopers gently guide their way down and land with amazing accuracy, right in the ground ahead of us. 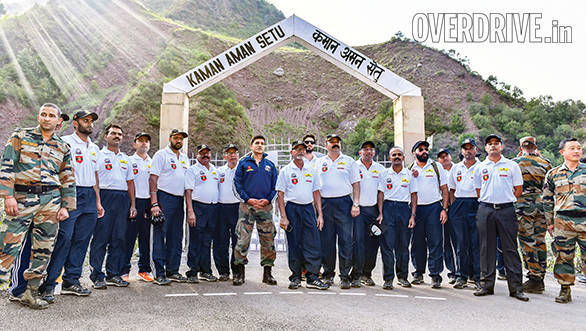 Soon after the show we began the drive to Srinagar, a slow and painful drive, if there ever was one. The two-lane road is in pretty bad shape in parts and also carries a lot of traffic. As evening set in, we entered the 2.8km long Jawahar Tunnel and emerged at  the other end into the enveloping beauty of the Kashmir Valley. Rolling mountains swathed with greenery surrounded us while the valley below was a shimmering gold mine of paddy fields. It was a sight that made us completely forget the tedious and dusty six hours we'd spent to get there.

Srinagar is a crowded city and we were glad to escape it early the next morning, for it would turn out to be one of the most exciting days of the trip. It started off on a beautiful note with a memorial service and wreath laying ceremony at the 1 Sikh Memorial at Baramulla. This memorial was set up to commemorate the very first Indian soldiers who were airlifted into the region in 1947 for the Jammu and Kashmir operations. We visited many more such memorials over the next few days, each one with its own incredible story of valour and sacrifice. For example, the famous battle of Saragarhi in 1897 where just 22 Sikh soldiers held strong against over 10,000 invading tribesmen. The soldiers were cut off from outside support but they held their post until the last man fired the last bullet. 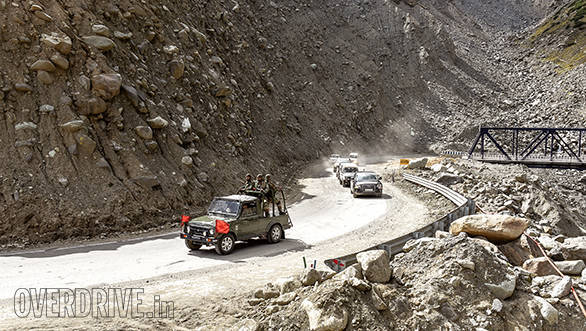 Then there's the nearly unfathomable story of Naik Nand Singh who won a Victoria Cross award, the highest award for bravery in the British Army for his actions in the Second World War. Nand Singh was part of the British Army fighting the Japanese in what was then Burma. He single-handedly killed four Japanese soldiers with his bayonet despite being seriously wounded on his thigh and shoulder by grenade attacks. His actions helped recover two key enemy bunkers and forced the Japanese forces to retreat. But Nand Singh's story doesn't end there. In 1947, while patrolling the border area around Uri (the very place we were driving through) Nand Singh and his platoon were ambushed and were quickly suppressed by enemy fire. A fierce battle ensued and as they forced themselves close enough for hand-to-hand combat, Nand Singh was the first to draw blood. He went on to kill a total of five men that day, but Nand Singh was grievously wounded himself and died from his injuries. His incredible bravery spurred on the rest of his platoon and they took out the enemies. Nand Singh was posthumously awarded the Maha Vir Chakra. 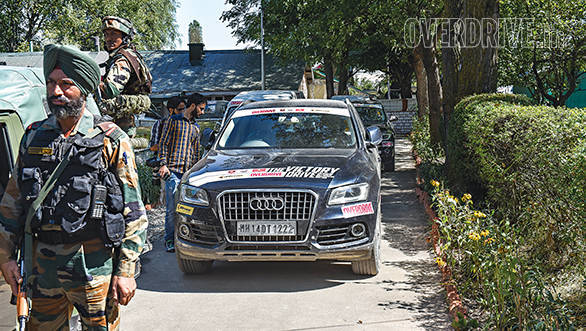 These are but two  there are countless more stories of similar valour and sacrifice in the Indian Army. The '65 war had its own sagas, like the legendary tank battle of Asal Uttar where Company Quarter Master Havildar Abdul Hamid, an anti-tank gunner took out an incredible seven tanks before he was mortally injured on the battlefield. He was posthumously awarded the Param Vir Chakra, India's highest award for bravery. 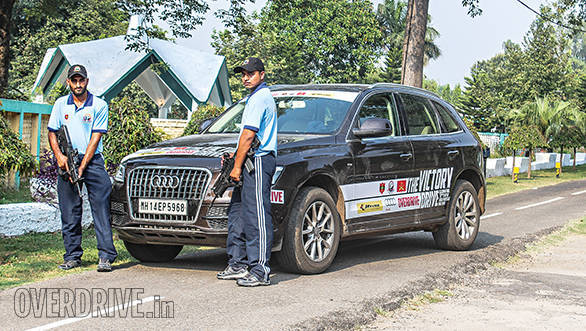 We had plenty of armed guards, but extra protection was offered by two men from the Special Forces, the most highly trained soldiers in the Army

Besides letting us paying our respects to India's fallen soldiers, these war memorials are an education on what incredible things our men have done for their country. It's a shame our textbooks make little or no mention of such key moments in our own history. 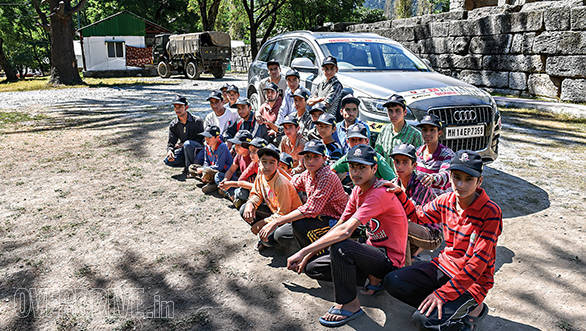 Back in the luxurious Audis, we hit the road to Uri from Baramulla that snakes through a fertile and spectacular valley. As you head closer to the border, the crowds thin and the army presence increases. The road follows the river Jhelum as it carves it way through the mountains and finally you arrive at the tiny town of Salambad. This is as far as civilians can go, but we went further and soon we were at the end of the road - the Kaman Aman Setu bridge. 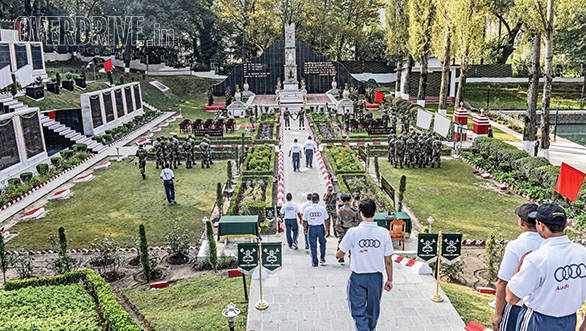 A beautiful memorial service at the Badami Bagh Cantonment in Srinagar

It's quite a surreal feeling, walking past all the razor wire, and security posts right up to the gate on the bridge and peering across. Just about 100m on the other side is the road to Muzaffarabad with the road signs in Urdu and Pakistani outposts in plain sight. As we were milling around, cameras clicking away someone noticed movement on the other side. From the outpost emerged a Pakistani soldier, and then another. The second man had a pair of binoculars and sure enough, we were being watched! It was a tense moment. Nobody really knew what to do, or for that matter what to expect. Just as I was preparing to duck, roll and sprint away in a random zigzag something incredible happened. The man on the other side slowly raised his hand and waved at us. A totally non threatening, almost friendly wave. We couldn't believe it but soon enough we were all waving back. 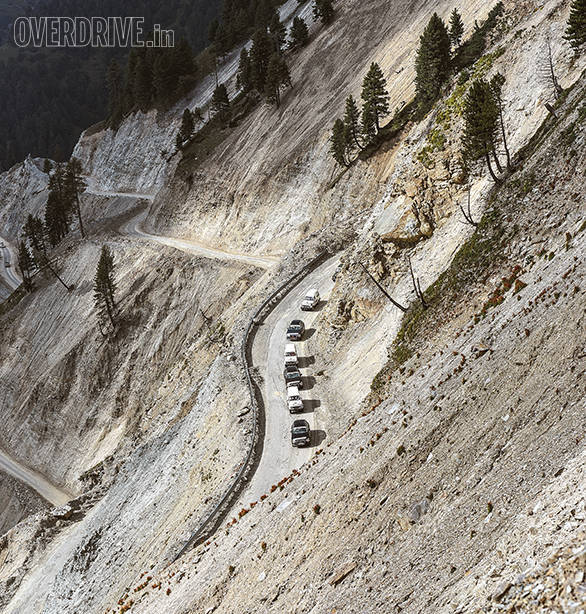 Naturally, security was a big concern, so we were soon herded back to the cars to make sure we got back to Srinagar by nightfall. As I returned to the safety of the Q7, my self styled luxury tank for the week, it dawned on me  what we just witnessed was a reminder, for the briefest of moments, that most of the tension in this region is spurned by politics. At the end of the day, all that people really want is peace. What a day. 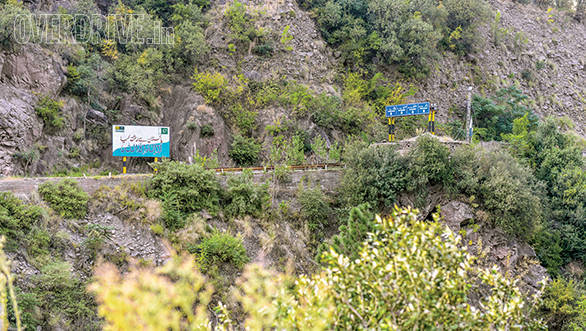 The next day didn't offer any cross border drama but we were in for a treat of a different kind  the famous Mogul Road. Our destination was Rajouri and to get there, we'd have to use the ancient Mogul route, except today it is a wide and well paved tar road. A driver's dream in the middle of a breathtaking landscape. At the start of the climb, the Audis were showing an outside temperature of 25 degrees but in just 15 minutes, the temperature dropped by as many degrees. And then, without warning, we were driving through a hailstorm. As we climbed higher the clouds began to part and the fear of cracked sunroofs gave way as we emerged into glorious sunlight at Pir ki Galli at the very top of the pass. Bollywood couldn't have come up with better timing. In terms of landscape, the Mogul Road reminds of one of those treacherous Ladakhi passes except that you have a road that can truly be enjoyed in dynamic cars like these. There are some broken stretches on the way down but the Audis (especially the Q7 with its adjustable air suspension) laughed it off, keeping us in complete comfort while we got to enjoy the views around. The Audis ensured that no matter how long the journey, we arrived at our destinations fresh and relaxed. 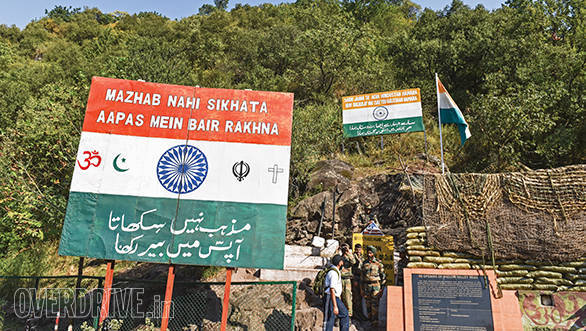 Boards on the Indian side of the Kaman Aman Setu bridge

It was nearly 5pm by the time we arrived for lunch with our hosts, the 16 Rashtriya Rifles at Bafliaz. Maybe it was our empty stomachs but we all thoroughly enjoyed that meal. Army food is simple, but tasty and nutritious. I've probably enjoyed more vegetarian food in that one week than I have my entire life! 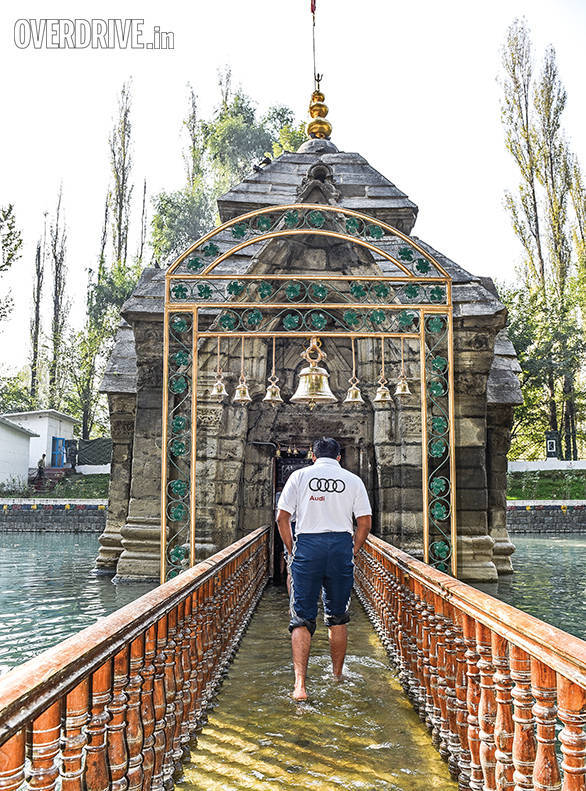 A beautiful old temple in the BB Cantt, Srinagar

Rajouri to Nagrota was the final drive through J&K. After a heart warming memorial service at the 25 Infantry Division war memorial we had the honour of meeting Sepoy Tej Singh who served in the war. In his mid eighties, Tej Singh's eyes lit up as he recounted the tales of his own battles at the Gurez sector and how honoured he was to be part of today's celebration. 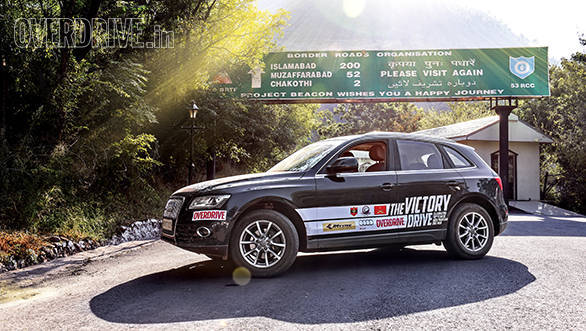 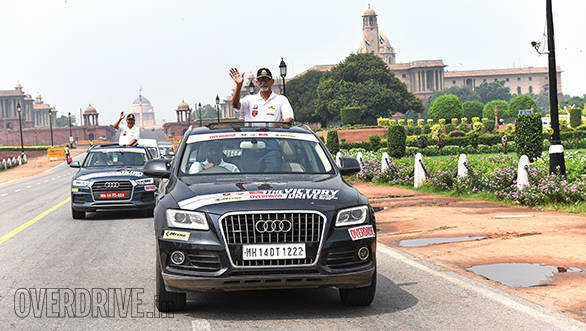 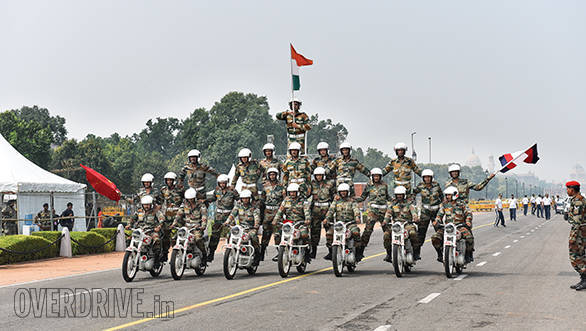 After Nagrota we hit fast four lane highways to Ambala and then Delhi where the rally would conclude with a final drive up Rajpath. But to me, the drive ended the moment we left the beauty of Jammu and Kashmir. It's sad and ironic, that while we celebrate fifty years of victory, the region has still not found peace. I have no idea when that will happen, but having spent this week with the Army, there's one thing I can say for certain. Today's Army thoroughly carries forward the legacy from 50 years ago. The crown of our country couldn't be in better hands. 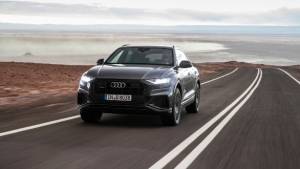