On days when I am feeling particularly uninspired, I tend to open Google, key in a word or two, and hit enter. It is an attempt to jog my brain a little. Learn something that I didn't know before. And whip those grey cells back into action. Sometimes it is the matter of attempting to put to rest something that, for me, happens to be an eternal conundrum, such as the difference between the words discreet and discrete. Sometimes it is something entirely arbitrary, like the finer points of a candlewick bedspread. And sometimes it is something not random at all. Instead it is something that I know and love dearly, but feel like learning even more about.
So it was one rainy night, finding myself unable to sleep, I began to type... N...e...v...i...l S...h...u...t...e before hitting enter and allowing Google to throw up search results.

Nevil Shute, should there be a chance that you aren't quite aware of the man, was one of the finest writers that ever walked the earth, or given that he was an aeronautical engineer and pilot by profession, flew over it. Shute wrote books that told incredibly human stories, some of which were partly autobiographical, and mostly centred around World War II. He was also handy with tools, forever tinkering in his workshop, fixing, tweaking, building, inventing.
But while reading about him yet again, all the while imagining that I knew everything there was to know about the man, I stumbled upon a piece of information that gave me goosebumps. Shute, I discovered to my amazement, for a brief period in the late 1950s in Australia, had taken to racing a white Jaguar XK140. 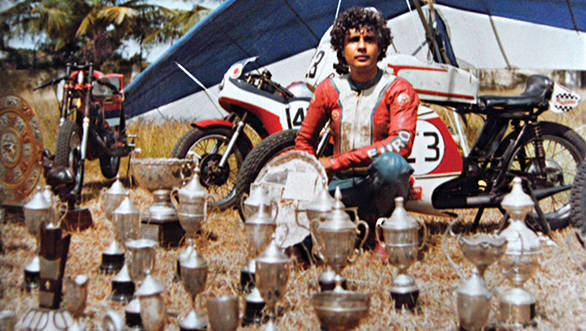 There were two reasons for my surprise at the fact. The first was that I was more than just a little annoyed with myself for not having known this to begin with, especially since his post-apocalyptic novel On The Beach had something of a racing twist to it. The second was because all of a sudden Nevil Shute reminded me of someone. Someone I'd met much closer to home.

It was sometime in 2011 that a colleague and I pulled up to a small garage in Mysore to shoot an old motorcycle. Not just any old motorcycle, mind you, but an old Jawa 250 racebike. A motorcycle that had won its curly-haired rider many a trophy at various abandoned airstrips that played host to Indian motorsport back in the day. A rider who'd gained the reputation of being fiercely talented and tremendously fearless all at once. He'd raced for fourteen years, pushing his own limits, shadowboxing so to speak, till a stuck throttle cable meant that he went from tackling a corner at Barrackpore to waking up in a hospital bed two days later.

Deciding that it wasn't worth spending his time in a less than wakeful state, he resolved to move on from racing. And so he became an aviator, soaring about the place with a glider or a microlight or whatever else it was that caught his fancy. In his spare time he'd use his mind to think up new ways of tinkering with cars, motorcycles and aircraft, spending long hours in his workshop fixing, tweaking, building, inventing, even coming up, in an attempt to save the world, with patented technology that makes the internal combustion engine go easier on the smelly stuff.

That game of shadowboxing - the need to push himself - extended beyond the racetrack.
It had all started with something his mother said to him. When he was shooed away from the racebikes at the Java factory as a youngster, she'd told him that everything that he needed to become a racer, he already had. He had a fully functioning body, which meant that the physical act of racing could be tackled. But he also had a wonderfully sharp mind, that, if he put to work, would be able to build a racebike. And so it was.

In the years that followed that first meeting in Mysore, I've often opened my email to find an epistle from this gentleman. Usually it is a quick note making me aware of some sort of global crisis, with the link to a magazine article that substantiates what he's mentioned. And while those hastily written emails cannot ever fall into the category of beautiful literature, they got the job done. They warned of problems that must be evaded, and aimed to make us aware of the direction in which the world was heading. In some ways that is what Shute tried with his sublime writing. He pointed out things that were very wrong with the world and warned against the (bleakness of the) future.

Nevil Shute flew, wrote, innovated and raced. Somender Singh raced, flies, innovates and writes. Both have pushed themselves beyond the ordinary, choosing every day not to feel uninspired, but instead, in their own ways, to inspire. And they've done it using nothing but the determination of the human mind and the force of those many neurons in the human brain.
I've often thought that those myriad patterns you see on the folds of the cerebrum resemble the curves, twists and turns of a racetrack, representing the many curves, twists and turns of life. And its finity too

Precisely the way the ticking of the clock is so important at the racetrack, the metaphoric clock ticks for us all. Reminding us that these days are all we have. That we have no excuses. That everything we need to achieve our goals is already here. That the point isn't to try to live forever, but perhaps to create something that will. Like Nevil Shute did. And like Somender Singh hopes to.