While we Indians have been reading about the first Tesla that made it to our shores, the Model X, Tesla CEO, Elon Musk has announced his plans of launching an electric pickup truck. The CEO made this announcement on his twitter handle where he clearly mentioned that the electric pickup truck would arrive right after the Model Y electric crossover that is scheduled to launch between 2019 and 2020. 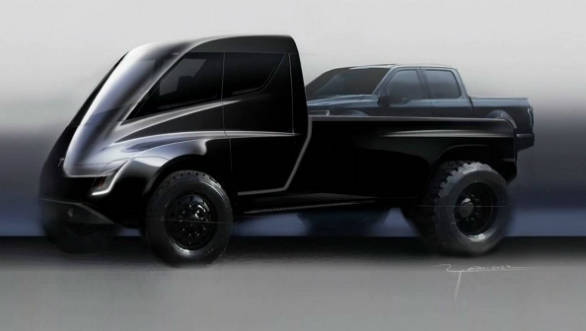 At the time of the unveiling of the electric Semi, Musk had teased an image of the Tesla pick-up truck. From the teaser image, we believe, the Tesla Pick-up is large enough to carry another pick-up truck that could be of the size of a Isuzu D-max V-Cross. Even though the Tesla pick-up will be based on the Semi, it will not be classified as a heavy vehicle which means that one does not need to have a commercial licence to drive one of these. "You'll actually be able to legally drive it with a driver's licence. It's kind of wrong, but I like it," said Musk during the unveiling of the sketch.

The Tesla Model Y electric crossover will be based on the Model 3. The only bit of information that was released by Musk about the Model Y was that it will feature 'Falcon Wing' doors like the Model X. The Tesla Model Y is expected to go into production in 2018.

Tesla Model 3 to launch in India by...
Advertisement