Team IndiMotard has made it to the finish line of the 50th SCORE Baja 1000! The first ever Indian team to compete in the event, managed to end the gruelling race, with all riders in good health. The team, comprising Anand Dharmaraj, Gurpinder "Nick" Sarao, Aditya Devabhaktuni, Ilyas Bham, Bhaskar Ramani and Gurinder Singh battled on over the course of the event, tackling the endless amounts of sand and silt until they crossed the finish line.

While the physical finish of the event was today, the timings and placements will be declared tomorrow. 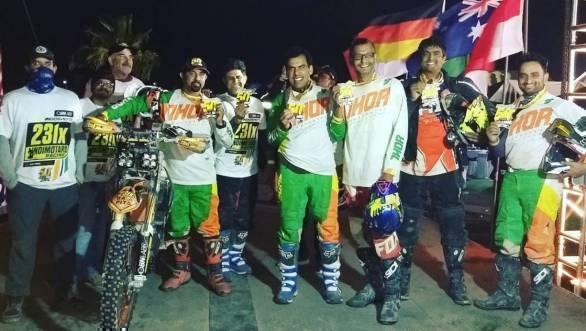 After the event, IndiMotard's Anand Dharmaraj told us just how gruelling it all was. "It's nothing like what we imagined it to be. It's brutal and relentless," he said. Fortunately, the team didn't face major roadblocks on their way to the finish line. There were a couple of glitches here and there (like the warning system that tells them when the 900bhp Trophy Trucks are approaching ceased to function), and there was the hassle of having to coordinate logistics. Where the next rider change would happen, and when the team needed to be there. Dharmaraj says that 60 per cent of it had been planned in advance, and the rest was figured out along the way.

Perhaps it's interesting to note that this team of riders, didn't take the usual route of doing the 250, and 500, before building up to and attempting the Baja 1000. In that sense, Dharmaraj laughs, saying, "Ignorance is bliss." For now the entire team has earned a little bit of a breather. After all, they've finished one of the most dangerous off-road races in the world!

More details when we have them.