Tata Motors has begun testing its autonomous driving technology in the UK, using its Tata Hexa SUV. The self-driving Tata Hexa was recently spotted undergoing tests in real-world conditions in the UK. The autonomous driving technology in the Tata Hexa is a result of the Tata Motors European Technical Centre (TMETC) collaboration with UK Autodrive. UK Autodrive connects automobile manufacturers and the British government for the development and testing of self-driving vehicles in the UK. The autonomous Tata Hexa is part of the first such tests by UK Autodrive being conducted in the UK, and also involved the Range Rover Sport and Ford Mondeo self-driving models. Jaguar Land Rover, owned by Tata Motors, and the parent company are also reported to be conducting independent tests for their autonomous tech. Tata Motors recently launched the Downtown Urban Edition of the Tata Hexa in India. 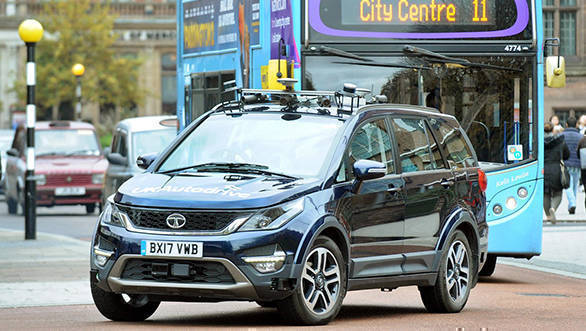 The current round of tests is being conducted at Coventry, while the next round is scheduled for Milton Keynes in 2018. Apart from autonomous technology, the Tata Hexa is also being tested for Emergency Vehicle Warning which detects signals from emergency vehicles such as ambulances to move out of their path. The Hexa is also being tested for Intersection Collision Warning, and Intersection Priority Management which will decide the order in which connected self-driving cars cross an intersection.