Suzuki has announced that it intends to launch the GW250 in India in January 2014. The naked street bike, which also goes by the name Inazuma 250, will be Suzuki's first motorcycle in India through the CKD route. It will be assembled at Suzuki Motorcycle India Limited's Gurgaon plant. The Suzuki Inazuma 250 is powered by 248cc, liquid-cooled, in-line two-cylinder engine mated to a six-speed transmission. It also gets telescopic front forks and hydraulic disc brakes front and rear.

While it is certain to be displayed at Suzuki's stand at the 2014 Auto Expo, the price and other details will be out well in advance.

In 2012, Suzuki had told OVERDRIVE that it is planning to bring in more options for the enthusiasts from 2014 onwards. So the GW250 is only the first of the many to come in this direction. 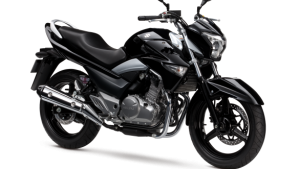 Suzuki GW250 Inazuma likely to be priced at...
Advertisement