Indian representation in the world of international motorsport is on the rise. This time it is thanks to the election of five-time Indian National Rally Champion, Sujith Kumar, as vice-president of FIM Asia. 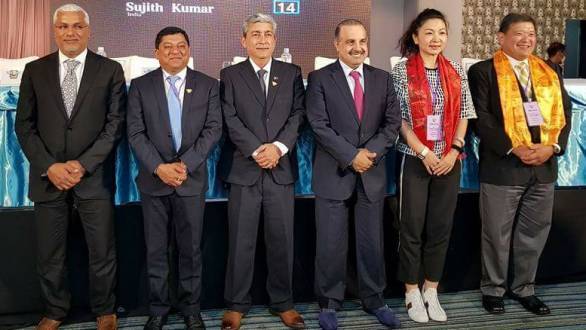 Sujith Kumar, second from left, has been elected vice-president of the FIM Asia

Sujith, who represents the Federation of Motor Sport Clubs of India (FMSCI) has now become the third Indian representative to join the board of FIM Asia. He will hold this post with the governing body of motorcycle racing for 28 countries for a period of four years. He won the election with a comfortable majority, even though eleven candidates were in the running for the post during the annual general body meeting. Sujith is joined on the FIM Asia Board by Vice Presidents from Bahrain, China and Guam and new President, Stephan Macky Carapiet of Philippines.

"This is a significant development for Indian motorsport," said Akbar Ebrahim, FMSCI president after the win. "We will continue to work towards promoting every discipline of motorsport in the country," he added

Sujith is also the chairman of the FMSCI's Two Wheeler Racing Commission, who has already had a considerable impact on Indian motorcycle racing, advancing rider training, safety and licensing standards for competitors and race officials. He has played a key role in bringing international events to India too, including a round of the Asia Cup of Road Racing to Buddh Circuit.