Sportscraft enters Limca Book of Records for the second time

Sportscraft which happens to be one of India's oldest motorsports event organisers has entered the Limca Book of Records for the second time. This time the Mumbai based motorsports club, founded by Shrikant Karani which started operations in 1984, set two records. One for the most number of motorsport events organised. The second for the Gulf Monsoon Scooter Rally - which has now been organised a record 27 times. 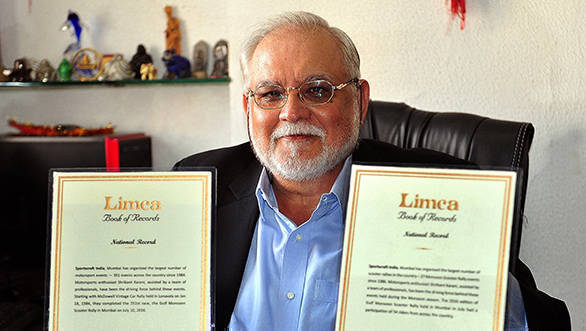 In addition to the mainstream events like gymkhana races, vintage car and scooter rallies and go-kart racing, Sportscraft has also organized races for autorickshaws, tractors and even rig trucks in various cities and rural areas.

The motorsport agency entered the Limca Book of Records for the first time in 2007 as they organized the 250th event. The first ever event that was organized by the company was the the McDowell Vintage Car Rally in 1984. The event was conducted in Lonavala in association with the Indian Automotive Racing Club.

This time around Sportscraft has entered the Limca Book of Records with two entries. The first being the feat of conducting over 351 events and the second was achieved after completion of the 2016 edition of the Gulf Monsoon Scooter Rally in July 2016. Spotscraft has been conducting the scooter rally since 1986 in Navi Mumbai. The main challenge of conducting the scooter rally in modern times it the unavailability of venue and the increasing traffic, said Shrikant.

Commenting on the achievement, 65 year-old Shrikant Karani said, "Recognition of our efforts to take motorsport to the masses by the Limca Book of Records is heartening. It is the enthusiasm of the ever-growing list of participants that's made this possible,"