It's been around five years since Honda Cars India got the Brio to our shores. Honda's first small car, available only with a 1.2-litre petrol engine, the Brio hasn't been able to charm buyers. However, hope appears in the form of these spy pictures of a facelifted Honda Brio that have shown up online. 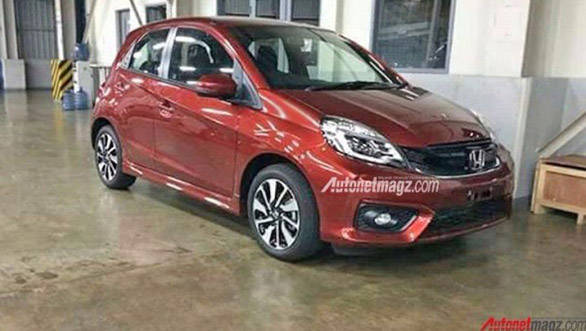 An all-new Honda Brio is expected to be unveiled sometime next year. In order to keep buyers interested till the new one arrives, Honda seems to be readying an updated one. This facelifted version has been spied in Indonesia. As seen in the pictures, the Brio facelift gets a bigger, wider grille and a new bumper while the headlamps get new inserts. Overall, the front end sports styling cues similar to that seen on the Mobilio RS.

Additionally, the Honda Brio facelift does not feature the chrome garnished grille that the current car gets. New diamond cut alloys and a body kit have been spotted in the pictures. The interiors of the car haven't been shot. There is no word on whether the Brio facelift will make it to the upcoming 2016 Auto Expo.