OVERDRIVE's very own Alan D'Cruz  spotted this motorcycle testing on one of his rides and it appears to be the new Pulsar 160NS. The 160NS has mostly been spotted testing with camouflage but this mule had no masking tape and looked very much like a production-ready version. This may signal an impending launch. 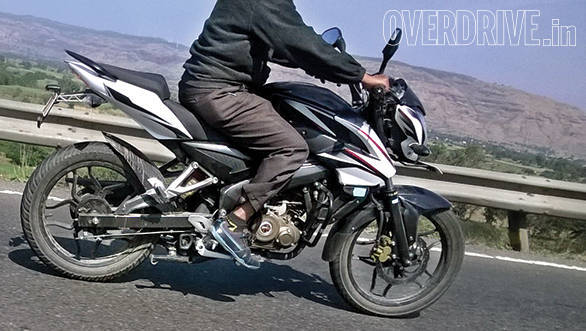 Visually the difference from the 200NS on which it is based is that the rear axle sports a drum brake and there is a kick-start lever. While the bike wears the graphics of the current Pulsar 200NS, expect the 160 to come with its own set of graphics. Another visual differentiator is the area where the 200NS mounts its radiator. The 160 does not have the radiator sight glass. That suggests that the 160 will have a small oil cooler rather than full-on liquid cooling. Expect the four-valve engine to offer more power than the competition along with good economy as is normal with Bajaj's motorcycles.

In a recent interview with CNBC-TV18, Rajiv Bajaj revealed that Bajaj is looking to launch six new products in the coming months and we believe that the company's 2015 line-up may include the 160NS.