Kashmir. A land so beautiful, it is often dubbed by the locals as Jannat-e-Kashmir. For us automobile enthusiasts, though, Kashmir is also a spectacular driving destination. Which is why 2018 marks the third year of the OVERDRIVE Mercedes-Benz India Winter Drive.
While the rest of the country reels under a heatwave, Kashmir in April is vibrant with colourful hues and a lovely nip in the air. To add to this, we assembled some of the finest SUVs from the Mercedes-Benz stable at Gulmarg, a popular tourist destination and a skiers paradise. We had the GLC 220d and 300 petrol, the GLE 350 with a V6 diesel engine and two AMGs - GLC 43 AMG and the mighty G63 AMG, also known as the G-Wagon. 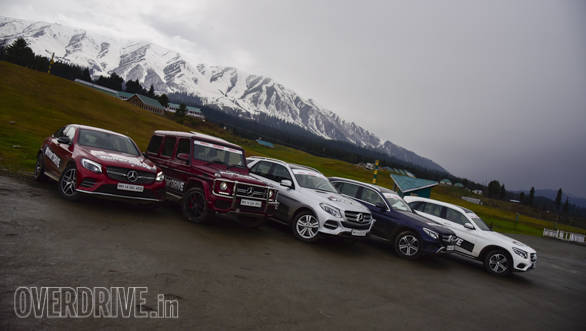 Parked in the forecourt of The Khyber Himalayan Resort and Spa, our Mercedes-Benz SUVs were the cynosure of all eyes, more so of the participants at this year's Winter Drive. " I just can't wait to get behind the wheel of G-Wagon, " said a beaming Nitin Joseph, a participant from Hyderabad. 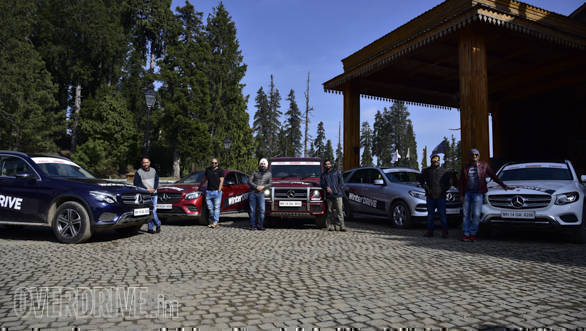 Calling him and the rest of the participants as enthusiasts would be an understatement, for most of the time, conversations revolved only around cars and motorsport. While some owned Mercedes-Benz or AMG cars, some were on the verge of booking one. The Winter Drive then, was the ultimate test drive, giving them a chance to experience the capabilities of these SUVs in an environment that spectacular yet challenging. 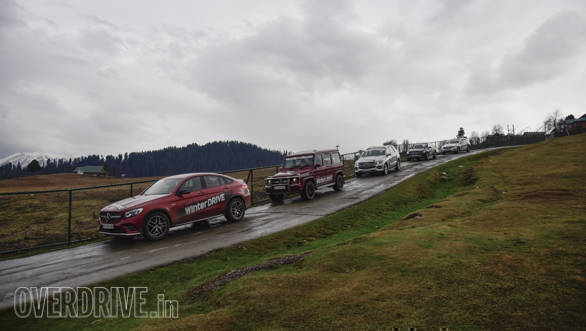 The idea was to give participants a taste of the supreme comfort that Mercedes-Benz vehicles offer as well as let them indulge in their sure-footed handling and off-road capabilities. The course we had set up offered a mix of all these scenarios but besides this, the route also gave the participants a chance to interact with the pristine nature of Kashmir and peek into the village life of the locals. 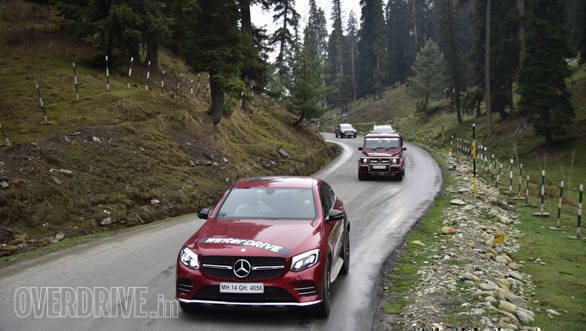 Driving out of the Khyber, the convoy made its way around the lush, green meadows that encompasses Gulmarg. On the horizon, we could see the snowed out, PirPanjal mountain range that's also a popular skiing destination in India. 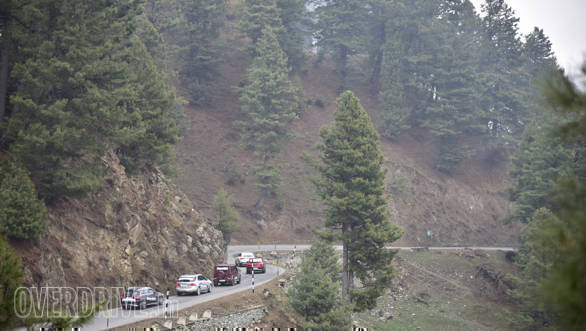 The road leading down to Tanmarg is a spectacular ribbon of tarmac, replete with flowing corners and tall, coniferous trees dotting the landscape. It's here where the participants revelled in the sweet handling of the GLC 43 AMG, GLC 220 and the GLC 300. The latter, in fact, turned out to be a revelation. "The petrol motor is quite peppy and the handling is amazing," said Swastic Ruia upon reaching Tanmarg.
After a quick tea and biscuit break, we turned off the Srinagar-Gulmarg highway, onto a narrow road that circuits back to Gulmarg. 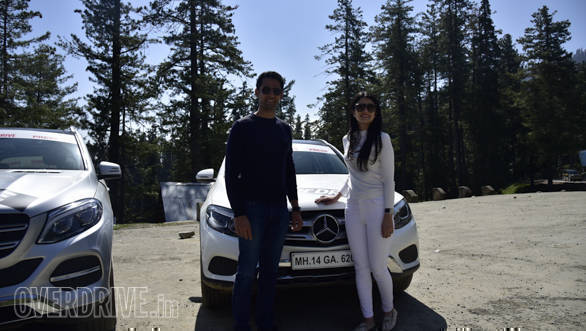 The road surface was smooth in some places and dusty in some other parts and to add to the mix, there were a few broken sections as well. The Mercedes-Benz SUVs however, carried on unperturbed, isolating occupants from any imperfections in the road. Dhruv Talwar, who was driving the GLC 43 AMG was left amazed by the ride quality that the GLC 43 AMG offered, despite its sporty orientation. Slotting the 43 AMG into comfort mode softens the dampers which help it glide over potholes or undulations. 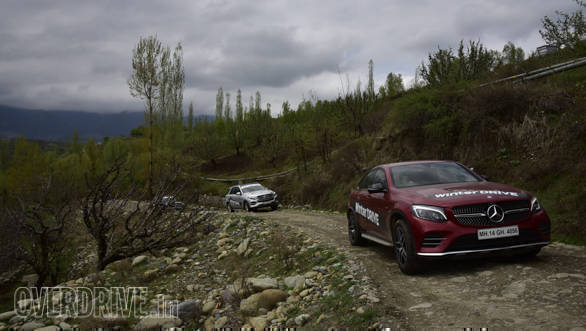 Chennai based pilot, Captain Prashanth was equally surprised by the versatility of the GLC 43 AMG. For the better part of the drive, they had the car in the Sports+ mode that lets out a louder exhaust note accompanied by lovely pops and crackles on downshifts.

The scenery, meanwhile, had begun to cast a spell on everyone. There are very few places that capture your senses and the sheer beauty of the landscape left an indelible memory. At one point we were driving past the river Jhelum, near Baramulla, an important waterbody that's responsible for keeping Kashmir's ecosystem buoyant. The hues that the setting sun cast over the river was surreal. 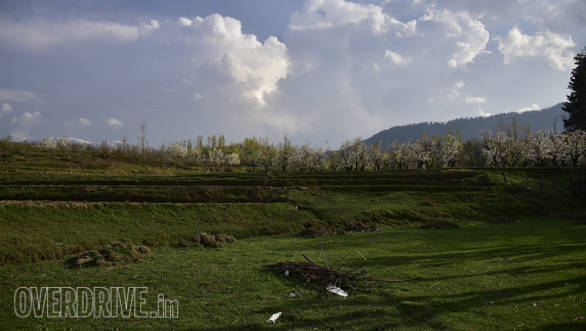 This was the Kashmir that we had only heard of or seen in photographs on the internet. To stand amidst the blooming apple orchards and feeling the gentle breeze blow by made us wish that time would, for once, still for a few minutes. The smile on everyone's faces revealed the sense of peace they felt. 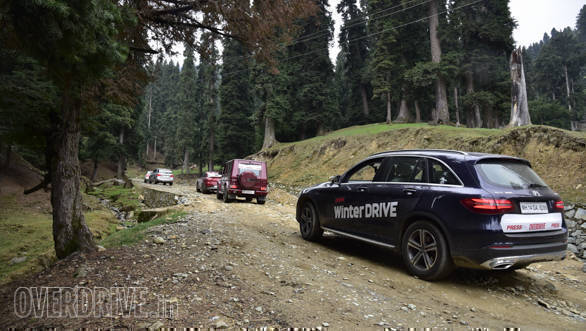 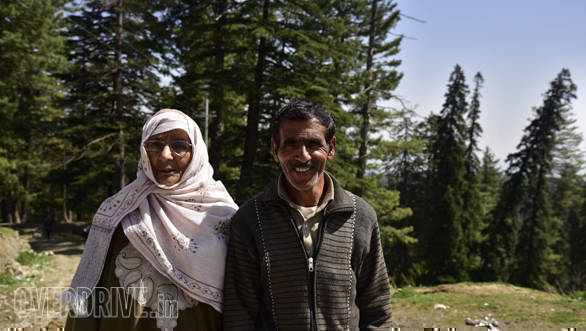 Driving by villages, we were greeted mostly by curious stares, while some stood in awe of the convoy of Mercedes-Benz SUVs driving past them. There were also a few children who were excited by the sound of the GLC 43 AMG, reverberating against the walls. But the SUV that stole the show was the burly G63 AMG. One could hear it barreling down the road from a mile and its monstrous exhaust note loud enough to capture the attention of everyone in the vicinity. 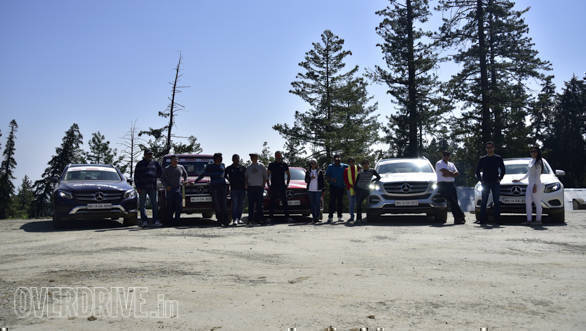 Goldy Nagdev, a Delhi based participant was ecstatic about the G63 AMG, an SUV that he also had tremendous respect for. A passionate driving enthusiast, Goldy has a steering wheel, tachometer, rev counter and other such tattoos on his arms and legs and he believes they are the means by which he can profess his undying love for an automobile. 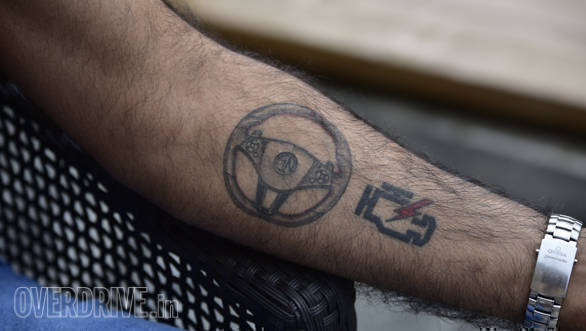 During his time at the wheel of the G63 AMG, he would deliberately fall back to the car ahead and then smash the loud pedal. He just couldn't get enough of the sensation of being pushed back in seat accompanied by the characteristic roar of a V8 engine. 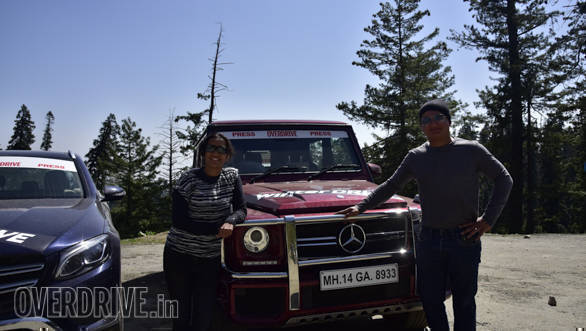 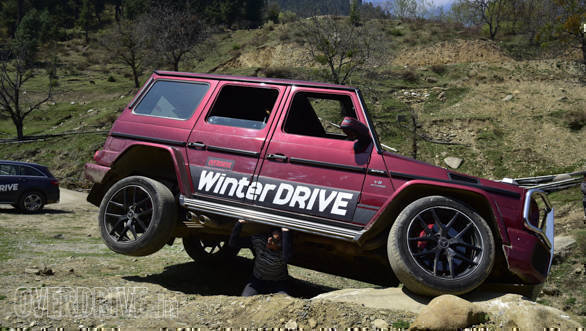 In fact, everyone who drove the G63 was left giggling and laughing, unable to contain the rush that only a Mercedes-AMG V8 can offer.
And when we ventured off-tarmac, the G63, once again blew people's socks off with its prowess. Despite weighing over two tonnes, the lockable front, center and rear differentials and incredible, suspension articulation allowed the mighty G63 AMG to own every terrain.
The off-road driving section was pretty challenging and the snow made ploughing through pretty difficult. To compound matters, our SUVs were running on stock tyres, without snow chains. It was the ultimate test of the Mercedes-Benz 4MATIC system. 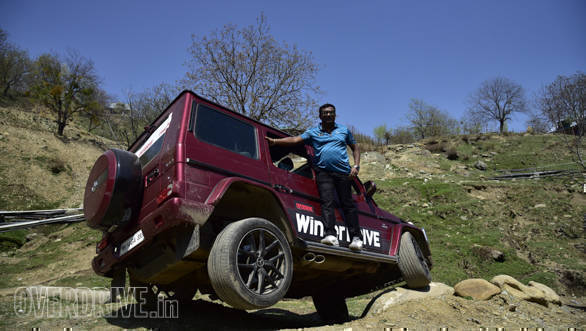 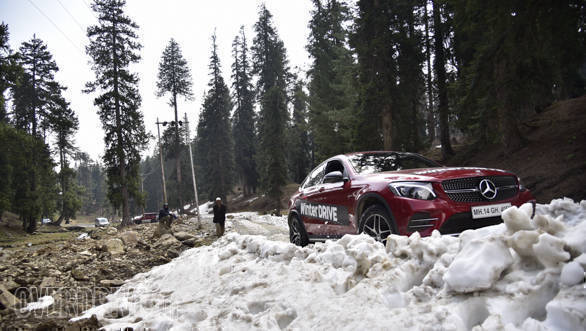 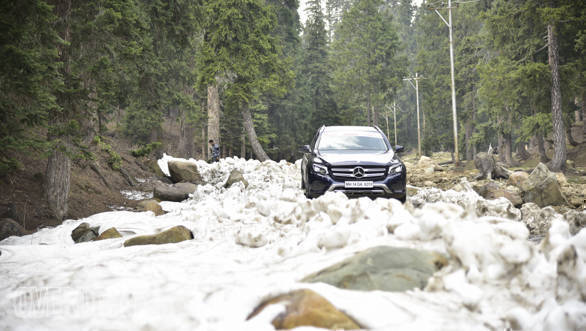 By distributing torque to the wheels with the most grip, the 4MATIC system helped the SUVs climb up the half a kilometre long incline. It wasn't as easy it looked and the black ice underneath the snow made the path quite slippery. But by carefully positioning of the wheels and maintaining momentum, the SUVs finally made it to the top. 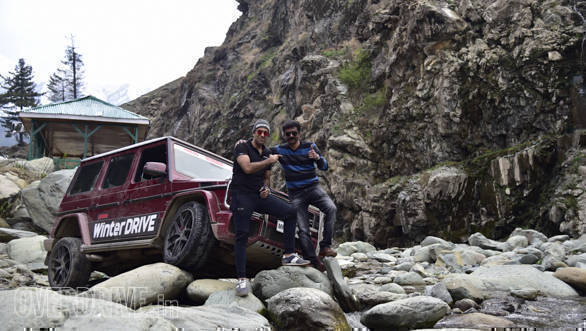 For many participants, this was the first time they had experienced something like this. To drive a luxury SUV up a rocky incline with a sheer drop on one side is not something one does every day, but the ease with the Mercedes-Benz SUVs tackled the terrain made most of the drivers look like it was something they were accustomed to.

On the way back to the Khyber, the participants were extremely happy with the performance of the SUVs. Delhi based businessman Gurmehar Dhupia, for instance, was very impressed by the GLE 350d. It's the fine balance of ride and handling as well as the off-road capability left him pondering over the prospect of buying one for his family. Dr Hedge, a surgeon based in Mysore was equally impressed with the GLE 350d, however, his heart grew fond of the GLC 43 AMG by the end of the drive. 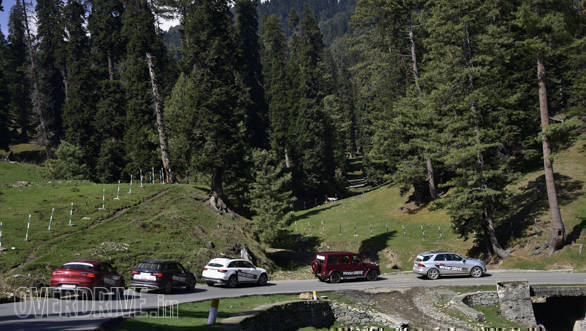 At, night, over dinner, one could see the participants engage in long conversations that revolved around the cars and the experience of driving them amidst stunning scenery. From smooth tarmac to snow-covered trails, they had driven the Mercedes-Benz SUVs on every terrain imaginable and come away mighty impressed by the GLC, GLE and the AMGs. 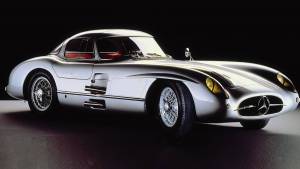