Royal Enfield updated the Himalayan to meet the BSVI emission standards, and soon followed the launch of the highly anticipated motorcycle in the Indian market, the KTM 390 Adventure. With the launch of the 390 Adventure, KTM has once again set a benchmark for value for money quotient and placed aptly in the entry-level adventure motorcycle segment rivalling the Royal Enfield Himalayan, BMW G310 GS and the Kawasaki Versys-X 300.

Following is the specification comparison of the above-mentioned motorcycle to put things in perspective. 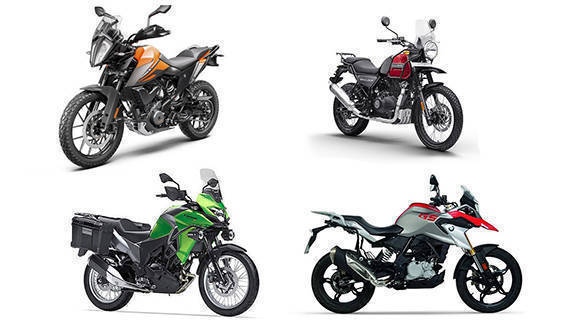 The Royal Enfield Himalayan gets the highest capacity engine, followed by the 390 Adventure which displaces 373cc. Meanwhile, the Versys-X 300 is the only one here with a parallel-twin cylinder layout, however, is the smallest capacity engine in the comparo.

Out of the four, so far the Himalayan and the 390 Adventure get a BSVI compliant engine. BMW and Kawasaki are yet to announce the BSVI versions of the G310 GS and Versys-X 300 respectively.

While the whole bunch gets a 6-speed transmission, the Himalayan is equipped with a 5-speed gearbox.

The KTM 390 Adventure gets the highest power as well as torque figure but given the Himalayan's engine tune, the peak power and torque comes in earlier in the rev range. The Versys-X 300 gets a high power figure but has the least amount of torque on offer.

KTM has upped its game by offering a traction control system in the entry-level adventure motorcycle market. Also, an IMU-based cornering ABS system that can be turned off. Other motorcycles only come equipped with a dual-channel ABS.

When the 390 Adventure was showcased at 2019 EICMA, the motorcycle was equipped with fully adjustable suspensions on either end. The India-spec model misses out on the adjustable suspension. That said, the 390 Adventure still gets the beefy-est forks upside-down in the front. While the Versys-X 300 and BMW G 310 GS get 41mm upside-down forks, the Himalayan gets 41mm telescopic forks.

While the Himalayan stays the most affordable adventure motorcycle in the comparo, the 390 Adventure wins with its feature-packed proposition for a price tag of Rs 2.99 lakh ex-showroom. The BMW G310 GS retails at Rs 3.49 lakh ex-showroom while the Kawasaki Versys-X 300 asks a premium of Rs 4.69 lakh ex-showroom.