Mahindra Two Wheelers has revealed a sketch of the first Mojo exclusive dealership. The dealership is set to become the first model-specific dealership in the Indian two-wheeler industry. 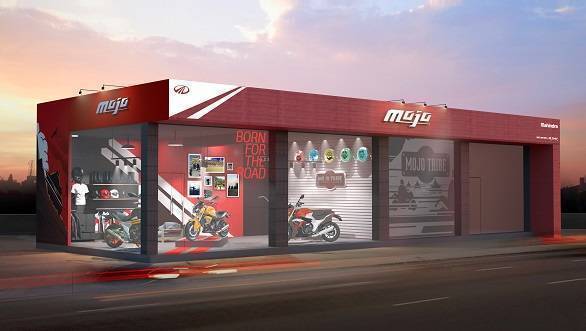 The Mahindra Mojo was launched in the Indian market in October 2015 and the motorcycle has since then developed a unique fan following. Though the Mojo has not been as successful in terms of sales numbers as Mahindra would have liked it to be, the Mojo has developed reasonably well as a brand.

The Mahindra Mojo is powered by a 295cc, liquid-cooled, single-cylinder engine with a power output of 27PS and 30Nm. During our road test, we found the motorcycle to have a uniquely likeable character, and those who bought it couldn't have agreed more. However, Mahindra's attempts to sell more numbers of the Mojo did not seem to work out for them. This could partially be due to the dismal sales of other Mahindra two-wheelers which shared showroom space with the Mojo. Mahindra even has stopped production of the Pantero, Duro DZ, Flyte and Kine because they sold in low numbers.

We've seen several brands adopting this strategy of late - premium vehicles are sold through exclusive retail outlets, for example Nexa. In two-wheelers, only Aprilia has its MotoPlex dealerships which cater to premium products.