Shell today launched its HX8 line of synthetic motor oils. Priced at Rs 850/litre, this oil is compatible for use in cars including SUVs, hatchbacks, sedans and MUVs. Shell Helix HX8 is specifically being marketed towards SUVs and turbo-charged engines- effectively conditions where the engine is likely to face high temperatures and high-stress situations.

This oil is being marketed as a mid-range product best suited for daily use as well as in high load conditions. The Shell HX8 motor oil was launched in Europe a couple of years ago and has since been launched in SE Asia and China. In India, the HX8 is an aftermarket product compatible with most OEM  guidelines and is available in 1-litre, 3.5-litre and 4.5-litre packs across India. The composition of the Indian product remains unchanged to the one sold internationally. 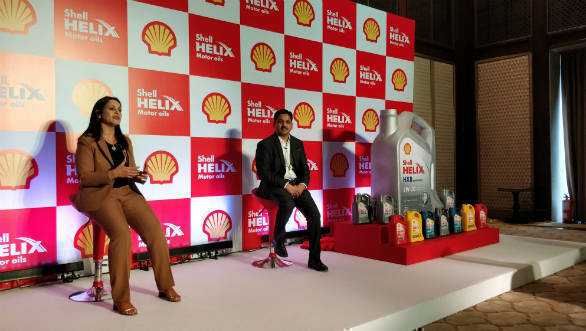 The HX8 is produced with a base oil derived from natural gas which allows for a purer product. However, Shell says the USP of this product is its flexi molecule technology. What this means is that the oil contains certain large molecules which remain dormant in regular low-stress conditions but change when in contact with higher stress and temperatures.

For example, in the area around the cam and cam follower, these molecules start to disintegrate and form a protective coating around these parts. Shell says the benefits of this is 40% better wear protection around critical components, 78% less oil consumption, 58% better oxidation stability and high-temperature deposit control.

Shell will be hoping the HX8 will appeal to buyers enough to make them shift from their OEM recommended brands to its products, given its market positioning and unique technology,