7-seater 2017 Volkswagen Atlas SUV unveiled for the US market

Volkswagen has just unveiled a new full-size 7-seater SUV for the US market  the Atlas. Measuring 5,037mm in length, 1,979mm in width and 1,768mm in height, it is larger than the Volkswagen Touareg. However, Volkswagen will be positioning it between the more luxurious Touareg and the smaller, India-bound Tiguan. With SUVs contributing to a significant portion of automotive sales in the US, Volkswagen is aiming to close every gap in the segment. It is based on the modular transverse matrix (MQB) platform and will be offered with two petrol engines, both with an 8-speed automatic transmission. The smaller of the two engines, a 2.0-litre turbocharged petrol which produces 238PS of power, will be sold in a front-wheel drive set-up. The larger 3.6-litre VR6 engine, which puts out 280PS, can be optioned with either a front-wheel drive or all-wheel drive set-up. This variant will also get different driving modes, such as Sport, Off-road, Ice etc.

With respect to design, the Volkswagen Atlas borrows several design cues from the other SUVs in Volkswagen Group. The front-end of the SUV, despite a few subtle hints of the Tiguan, looks typically American thanks to the large LED headlights and wide grille. The side profile, which resembles the Audi Q7, goes back to looking German with the simple straight lines. The distinct crease running from the front fender to the tail lights highlight the flared wheel arches. 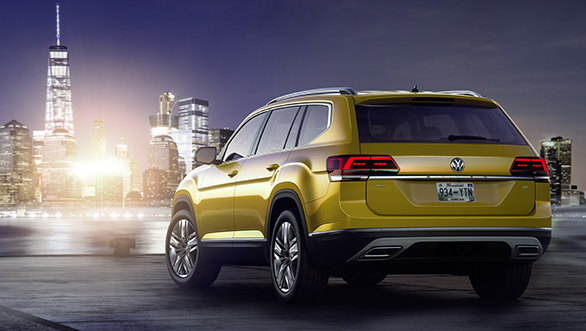 The simplistic German design language is maintained around the rear of the car too with the neat creases and the boomerang-shaped lights like the ones on the Tiguan. The interior of the car isn't very flamboyant either with the symmetrical dash layout and the wood inlays. The SUV will get the Active Info Display which, like Audi's Virtual Cockpit, offers a digital instrument cluster. The Volkswagen Atlas will be offered with a host of safety features, such as adaptive cruise control, collision warning, automatic emergency braking, blind spot monitoring, park assist and post-collision braking.

This SUV will be built alongside the Passat at Volkswagen's Chattanooga assembly plant in Tennessee, USA. The brand states that it will be also sold in Russia and Middle-Eastern markets by the end of 2017. However, we don't see the Atlas reaching our shores anytime soon.