Recent rumors suggested that Samsung was going to provide the battery pack for the Tesla Model 3. However, they were all put to an end after a tweet from Elon Musk effectively making things very clear. The significance of this tweet, however, is in its aftermath  Samsung's shares went down by Rs 3,870 crore, while Panasonic's shot up by 3 per cent or Rs 5,338 crore.

The rumors aren't completely unfounded though  Samsung is currently supplying batteries to Tesla, not for its EVs, but for Tesla Energy.

The Model 3 is Tesla's entry-level electric vehicle and was revealed in early 2016. Prices start at $35,000 (Rs 23.37 lakh) with a release date slated for late 2017 in the US, with full production commencing in 2018. This price is also exclusive of the government incentives, so expect the effective price to be a fair bit lower. Upon its reveal, the Tesla received over 3,50,000 bookings for the Model 3. Tesla plans to enter the Indian market before the launch of the Model 3. 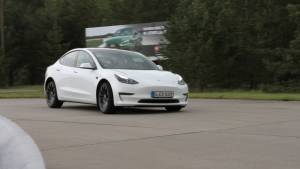