Starting way below at the 19th place, American driver Ryan Hunter-Reay never expected to win the Indy 500. The 98th edition of the race saw a large portion of the 500 kilometre race run without a caution but ended with a haze of wariness including a complete halt as the track needed to be cleared of debris. The stoppage forced Hunter-Reay and Helio Castroneves to go flat out at each other with only six laps to spare. But it was the American who prevailed in the end. 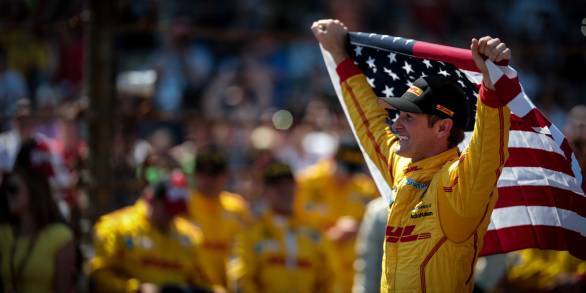 Ryan Hunter-Reay after his win

Andretti Autosport's Hunter-Reay who had won the 2012 Verizon IndyCar Series Championship and finished third at the Indy 500 last year had a fantastic race overall. Castroneves who  was in the lead till the 196th lap of the race, was followed by Marco Andretti, Carlos Munoz and former Formula one racer, Juan Pablo Montoya past the finish line. After the race Castroneves said, "I did everything I could do. What a fight. But certainly taking the positive out of this, it was a great race. I did everything I could obviously to try to stop him. I do not take it for granted. I'm extremely happy with the result." Defending champion, Tony Kanaan on the other hand, had come with intentions of getting his name on the History books as the first to retain the title. What seemed to be an apparent battery problem, caused him to drop 18 laps off the pace and had his endeavors smashed at the first pit stop itself. Also competing this year was former Formula 1 and 1995 Indy 500 Champion, Jacques Villeneuve. Though it wasn't the comeback he would have hoped for, finishing 14th, Villeneuve was able to complete the 200 lap race despite picking up a few knocks here and there.

Becoming the second closest finish in the history of the Indy 500, Hunter-Reay managed to keep his cool and head past Castroneves with another three laps to spare. On asked about how he felt about the race the elated American said, "It's a dream come true. . . . (The Indy 500) is American history; this is better than a championship. I hope the fans loved it because I was on the edge of my seat."