Royal Enfield recently went to the famous Wheels and Waves festival, a motorcycling and surfing event in Europe. Held in Biarritz, France, the festival lasted from June 8-12, 2016, and showcases various custom motorcycles from around the country, with various themed art and music. Royal Enfield showcased its complete line-up, including two of its own custom motorcycles. 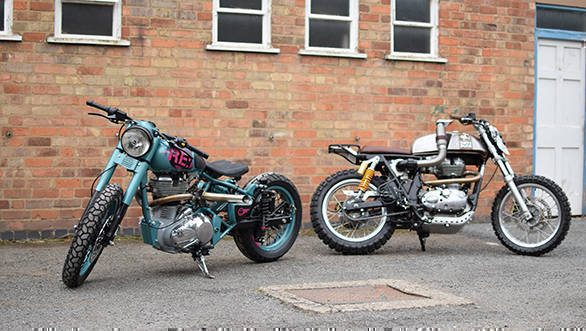 The first custom has been named Mo' Powa' (try saying that while trying to sound like an intellectual) and is styled like a low riding dragster with an almost skeletal appearance. Based on the Classic 500, the bike gets its namesake from the turbocharger bolted into the frame (why not), along with a hand-fabricated exhaust from Harris Performance.

The second custom Dirty Duck is based on the Continental GT and is a bit of an oddball. It is styled to be like an offroader with a protective panel, off-road tyres and get this  a snorkel (for underwater adventures). The snorkel has also been fabricated by Harris Performance. The headlights are embedded in a fabricated panel, while the tail lights are twin mini-LEDs which lend a cyborg-esque look to the face.