Royal Enfield has introduced a new Squadron Blue colour for its Classic 500 motorcycle. It is priced at Rs 1.93 lakh, on-road Mumbai which is a Rs 5,000 premium over the Classic 500 with standard colours. The company says that the new paint shade is inspired by the Indian Air Force and has introduced the colour to pay homage to the Air Force. 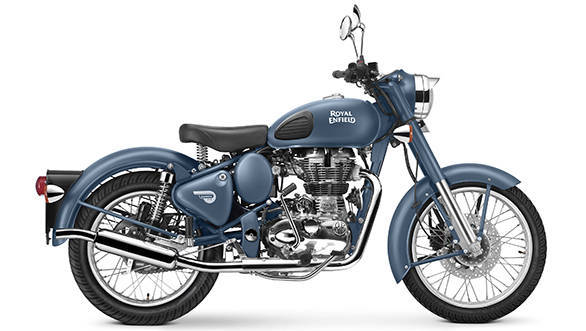 Royal Enfield has supplied motorcycles to the Indian Armed Forces since 1952 when it received an order for 800 motorcycles. The Indian Air Force has been using the motorcycles as part of its Air Force police fleet.

The Royal Enfield Classic 500 is powered by a 499cc, four-stroke, single cylinder fuel injected engine that produces 27.2PS at 5,250rpm and 41.3Nm at 4,000rpm. The new colour is only available with the Classic 500 and is available in all RE showrooms in India.

Speaking about the new colour scheme, Rudratej Singh, president, Royal Enfield said, "The Classic 500 Squadron Blue is a tribute to Royal Enfield's war time presence and association with the armed forces. We wanted a variant with a genuine armed forces heritage for our customers and for this, Royal Enfield turned to the Indian Air Force for inspiration. We had to be very particular about the colour to create an authenticity and also provide the motorcycle its post war appeal. This inspiration led us to create the Classic Squadron Blue."