Royal Enfield has launched the Classic 500 Pegasus edition in India at Rs 2.49 lakh, on-road Mumbai. Only 1,000 units will be built of which 250 are earmarked for the Indian market. The Royal Enfield Classic 500 Pegasus is inspired by the RE/WD 125 from WWII. Royal Enfield was actively involved providing vehicles and ammunition during the World Wars. The company used to make components and parts for rifles in the early 1800s. 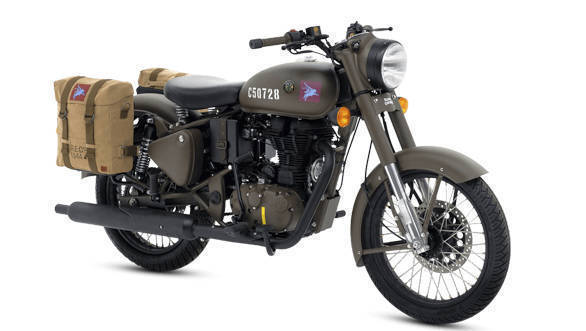 The Flying Flea was a lightweight motorcycle and there are instances when soldiers used to simply lift the bike off the ground. It's agility and tough build made it a favourite among the troops. The Classic 500 Pegasus reflects Royal Enfield's heritage and role in providing transport during the Wars.

The Pegasus Edition is available in two colour options internationally - Service Brown and Olive Drab Green. Indian buyers can only get the brown colour as the green colour, is reserved for Army vehicles only. Each motorcycle comes with a unique serial number that's stencilled on the tank, reminiscent of military motorcycles. Other unique touches are a bespoke set of military-style canvas panniers, the Pegasus motif (the logo of the airborne troops) on the tank and panniers. Each motorcycle has brown handlebar grips, a leather strap with brass buckles across the air filter, blacked out silencers, rims, kickstart lever, pedals and headlight bezel to accentuate the period look.

Mechanically the Pegasus edition remains unchanged from the standard Classic 500. It is powered by a 499 cc, air-cooled, single-cylinder engine good for 27.5PS and 41.3Nm. The frame, suspension and tyres have been carried over as well.

Royal Enfield says that it worked hard to get the right shade of paint on the Classic 500 Pegasus. The RE roundel was also re-created to match the one on the Flying Flea. The company has paid attention to detail, like matching the yellow stripe on the coloured engine casings to what was on the military bike.

Registrations for the Classic 500 Pegasus edition have begun and bookings will commence online, on July  10, 2018. The company says that bikes will be allocated on first come first serve basis. Rush before all the units for India are sold out. The price also includes helmet, canvas panniers and Pegasus shirt.