Rolex has a very long association with racing, dating as back as 1930s when Sir Malcolm Campbell broke the 300mph speed barrier in his land speed car, Bluebird. Every year since 1997, Rolex organises several events at the Monterey Classic Car Week where vintage car owners from all over the world come to race in their old-age beauties. The event in itself is not so much about racing (it still remains an integral part) as it is about celebrating the automotive evolution and tradition over the years. Set against the Monterey Peninsula, the event is scheduled from August 18-21. The list of events starts with the Pebble Beach Tour d'Elegance where the car owners start from the Lodge at Pebble Beach and traverse through the nearby mountains and valleys. Following it is the Quail, a motorsport gathering held at the Santa Lucia mountain range.

All through the event weekend, the Rolex Monterey Motorsports Reunion is staged at the Mazda Raceway Laguna Seca. Motorsport history is celebrated with racing at the iconic circuit. The whole gala concludes with the Pebble Beach Concours d'Elegance which is a competition of grace and poise above everything else. Cars are judged on their historical accuracy, technical merit and style, and the winner heads home with the Best of Show trophy. 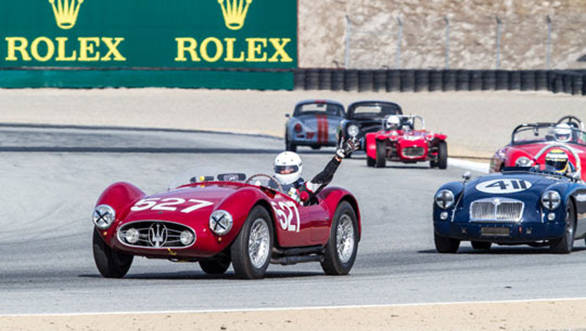 Sir Jackie Stewart, a three-time FIA Formula One Drivers' World Champion and a long-term Rolex Testimonee, described the whole event, "The elegance and splendor of the cars that race, as well as those on show throughout the event, represent the ultimate in motorsport aesthetics. They reflect a global appreciation for the past and its traditions. The people who buy the cars, who restore them, show them and race them are pursuing excellence in style and precision. What I see at Monterey always gives me a feeling of great pride."