The morning dawned clear enough at our camp in Diskit. The monastery above us glittered in the sun while one by one the dark peaks were rendered in orange by the rising sun. Having wiped a thick layer of overnight frost off our Centuros, we allowed them to idle in the sun and warm up while we grabbed ourselves some breakfast. 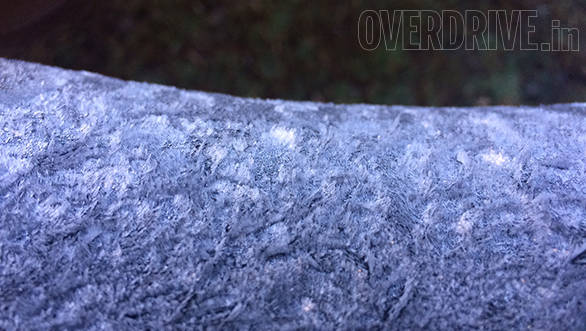 Having wiped a thick layer of overnight frost off our Centuros, we allowed them to idle in the sun and warm up

Climbing back up from Diskit to North Pullu was fun. Once again, uphill roads and high altitudes were robbing the Centuro of power and we were making up for it by allowing the suspension to soak up bumps and the handling to keep momentum and pace. It was very cold. Through my thick winter gloves and my waterproof boots, I could feel the cold settling in. Everyone was thankful for a quick tea stop in the village of Khardung. 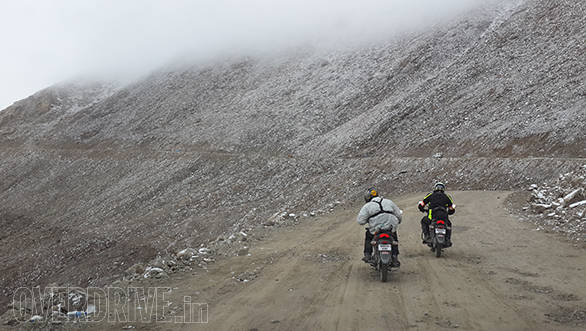 Then a truck driver stopped. He had come down the pass and he looked at our wee Mahindras with great concern. "There's ice on the road, be careful you all." We waved him an uncertain but thankful goodbye and carried on. At North Pullu, the mountain stood before us shrouded in a new coat of white snow.

Traffic was moving. We could see Mahindra Xylos and Boleros inching their way up and down the mountain plus the everpresent forces trucks. We decided that if they could hack the cold mountain, then so could we. Forward ho!

Four corners later we realised the peril we were in. A truck came sliding sideways around a corner while we slid to a halt on an iced up road. When my bike, switched off, in gear, brakes on, started sliding backwards towards the wall and putting my feet down seemed to have no effect, I finally understood how precarious the situation was. Two other bikers, also stranded in that corner helped stabilise me.

But I quickly figured that the solution was to get off the packed ice and head up on the unmarked snow which in traction terms is like fresh mud - not perfect but useable. From there to the top, for me, was a simple matter of chugging uphill in first gear using small throttle inputs and planning my route so my wheels stayed on the fresh snow. In a few places, I used the fresh tread marks of a recently passed SUV on ice to cross stretches where fresh snow was thin on the ground. And an hour later I arrived at K-Top with only three-four big slides to show for the climb.

Then I noticed that I was alone. The other Centuros were somewhere behind me. Turns out they were having quite the adventure. Jamshed nearly got sideswiped by our own backup truck. He was stranded in the ice when the truck decided to pass them and park so he could be helped. Joshua decided that the fresh snow may have packed ice underneath and since most was on the edge of the mountain, it was too great a risk. The three Centuros were fighting their way up the mountain inch by inch on ice, trying to stay on the icy slush where the SUVs and trucks had torn the ice up.

It was tough going but going it was.

I was having my second cup of lemon tea when the trio of Centuros crested the final rise. They weren't happy. Joshua yelled at me saying, "I am so disappointed in you, Shumi. You just left us and buggered off. This was not a matter of skill. We were worried about you and what if we needed your help?"

My gloat disappeared pretty rapidly. My rapid, uneventful ascent of K-Top deflated from a glorious achievement that swelled my chest to a vague feeling of guilt. I usually feel awesome about myself. But this was not one of the those times. 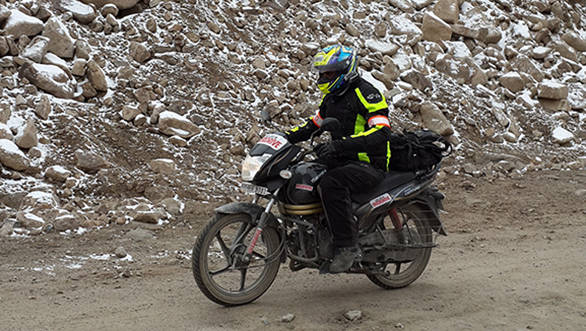 We watched other bikes struggle, slide and fall. Our Centuros were like mountain goats by comparison

Deciding to quickly descend the mountain, we watched other bikes struggle, slide and fall. Our Centuros were like mountain goats by comparison. Two corners later, the only snow that remained was on the sides and our descent was rapid.

Back at South Pullu, Lendel said, "I'm glad I decided to complete the ride. It didn't look like fun, but it feels great to have done this." I think that summed it up for all of us.

An hour later, we were parked at our hotel reliving one of the hardest rides of our lives in our heads. We started out on the ride thinking we would have to really push the Mahindras to get it done. We realised in the afternoon sun in Leh that the Centuros had done their job. And in the process, we had risen above. 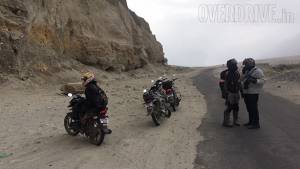 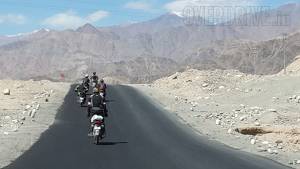 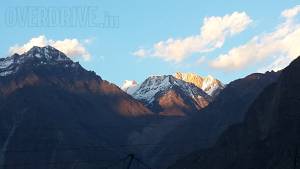