After a bitterly cold night that left the taps frozen, we woke up to another perfectly clear sky. It wasn't much warmer but the mood was on the up and up.

This was to be a short crisp ride into Leh crossing only the Tanglangla. Of course at about 17,500 feet above mean sea level, you call Tangalangla only at your own peril. First, we crossed the three kilometres of dirt from the camp to the highway through the magnificent More Plain. Most of it is packed dirt but there are patches of deep, soft, powdery soil that really shake the bike up. But soon we were on the tarmac highway buzzing merrily towards the pass. The Mahindra Centuros were singing along at a lovely clip. Evidently the flatness of the plain compensates for the nearly 14,000 feet height of the plain.

Then began the climb. Tangalangla is a tough pass for small engines. Apart from its height, it's also a long, steep climb and feels endless as the road winds around the mountains before it gets to the top. But then again, most of the climb is now fresh tarmac so climbing should be easy. Of course, it wasn't. The bikes found the gradient and altitude a tough combination. They never quit on us but soldiered on gamely uphill at speeds as low as 19kmph in top gear going flat out. How tough do you think the conditions are when your engine can only make a quarter of its normal power, eh?

Eventually we crested the top. It was very cold but bright and sunny. Within moments you could feel the lack of oxygen. And as soon as the obligatory pass-top image was captured, we headed down in a tearing hurry. Team OD, for instance, could immediately feel that lightheadedness that precedes headaches and worse. Luckily the downhill stretch is picture perfect tarmac and progress down to Rumtse is fast. We stopped at Rumtse to catch our breaths and some breakfast. 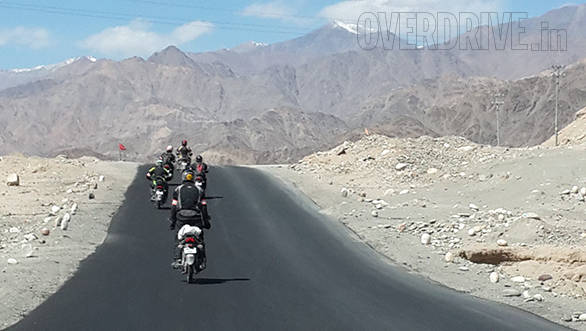 The riders make their way to Leh

More Maggi and omelette toast later, we rolled the final 100km into Leh. Tomorrow, we wash the accumulated muck off our bikes and otherwise just lounge around.