Information and images of the new Renault car codenamed XBA will be out tomorrow, May 20, 2015. The car has been spotted testing on multiple occassions, mostly near the Renault-Nissan plant in Oragadam. Ahead of the global unveil tomorrow, here is what we know about the Renault XBA -

The Renault XBA (rumoured to be named the Kayou) sits on a crossover-like platform, called the Common Modular Family or CMF, which the company unveiled in 2013. Datsun showcased a car based on this plaform at the 2014 Auto Expo, the redi-Go concept. The CMF platform has the flexibility to accomodate cars and crossovers and has different spin-offs like the CMF-A (where the A stands for 'affordable' to indicate entry-level hatchbacks) on which the redi-Go is based. Our observations based on the spy pictures indicate that the Renault XBA will share many bits from the other cars in its family. These parts include the headlamps, grille and interiors. In all the spy shots of the Renault XBA, it has been noted that the car has a single wiper, internally non-adjustable rearview mirrors, and steel wheels. However, the car is expected to get upmarket interiors as compared to the Datsun brand of cars. 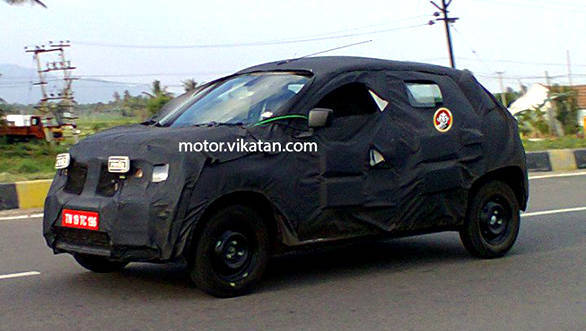 The biggest surprise in the Renault XBA though, will be an all-new petrol engine. While it would have been easy for the manufacturer to use the proven 1.2-litre motor which powers the Go siblings as well as the Pulse and Micra, the CMF-A platform, and the segment overall, appears to require a more efficient engine. Renault has been developing this engine for quite some time. The powerplant, codenamed BR08, is expected to be a 1.0-litre mill. This engine is likely to produce close to 60PS of power. It is also expected to have a claimed fuel efficiency figure in excess of 20kmpl. Renault plans to offer this powerplant with a conventional manual transmission as well as an AMT. It's also speculated that Renault will be introducing a powerful iteration of the 1.0-litre engine, possibly a turbo unit. Online reports say that plans for a diesel motor have been put on the back burner as of now due to the currently low difference in prices for petrol and diesel.

There will be at least five variants of the car when it goes on sale around Diwali this year - three for the manual and two for the AMT. Renault usually packs its cars with safety features and is likely to offer a driver airbag as an option. Currently the Maruti Alto K10 has an optional driver airbag on offer, whereas the Hyundai Eon doesn't. Both the competitors, however, don't offer ABS.

More details and images of the Renault XBA will be available tomorrow. Stay tuned. 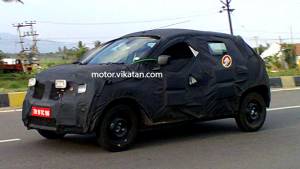